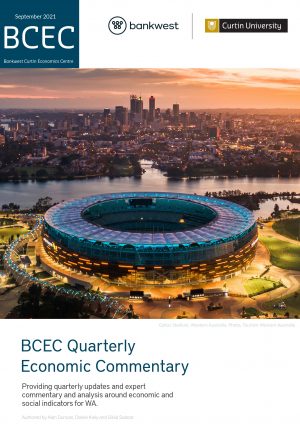 WA’s AFL teams did not manage to make finals this year, but WA’s ability to host the 2021 AFL Grand Final came directly from the state’s success in keeping the COVID-19 pandemic at bay. Our relative freedom from COVID-19 outbreaks has maintained strong retail spending, and supported business activity especially in the resource sector. Export activity remains strong, despite recent falls in the iron ore price, with WA accounting for more than half of the nation’s exports by value.

The WA government posted a healthy budget surplus of $5.6 billion in 2020-21, with an expectation of net operating balances of between $2 billion and $3 billion in the next two years. The strong operating result for 2021-22 was strengthened through revenues from royalties that grew $3.7 billion to $12.1 billion on the back of iron ore prices that remained over $120 per tonne for the entire 2020-21 financial year and hit $230 in June.

Household spending provided much of the support to WA’s economy during the initial stages of the pandemic in 2020, before private business investment put a shoulder to the wheel in the first quarter of 2021 with growth of 10.8 per cent over the March 2021 quarter.

Government spending and public investment will help support economic growth and boost productivity in Australia over the longer term. However, recent lockdown episodes show that Federal and State governments cannot continue to do this indefinitely – private business activity and investment will both need to contribute consistently in order for WA’s economic growth to be sustained.

The loss in retail trade in WA was close to $170 million from the first February lockdown, but the impact of later lockdowns appears to have been less severe, with consumption bouncing back faster than before.

The strong retail growth in WA contrasts starkly with a national picture that has seen retail turnover falling progressively over each of the last three months. Total retail turnover across all states dropped to just under $29.3 billion in August 2021, having fallen 6 per cent since May 2021.

The economic impact of the longer lockdowns in the Eastern states are especially apparent when we compare the changes in retail turnover across states over the three months to August 2021. In New South Wales, retail spending dropped by a full 8 per cent in the quarter to August. For Victoria, retail turnover fell by 4.2 per cent over the same period.

But closed borders also come at a cost

The WA economy has been afforded some protection from closed borders over the course of the pandemic, with an economic performance that outpaces any other state in the country.

WA has more than recovered from the 100,000 drop in employment over the first two months of the pandemic. The state’s unemployment rate now sits at 4.6 per cent, in line with the national rate. Labour force participation rates have declined slightly, but vacancy rates remain high.

But the combination of closed borders and strong economic activity, the latter fuelled by global demand and government stimulus, has led to something of a skills shortage in WA. And there is some evidence that labour shortages are starting to push wages higher, with annual wage inflation in WA rising to 1.6 per cent as at June 2021.

Population growth will be needed to maintain WA’s economic recovery

WA welcomed just under 10,000 overseas migrants to the state in the March 2020 quarter, and nearly 29,000 over four quarters prior to the pandemic, an average of 7,200 each quarter. But the flow since then has been very much in the reverse direction, leading to a net population loss of nearly 5,700 people in the four quarters from June 2020 to March 2021.

Slow population growth will prevent businesses from recruiting the workers they need, and will place downward pressure on retail activity, housing markets and economic growth. And a shortage of skilled labour will hold WA’s businesses back, and runs the risk of slowing down future economic growth.

And yet the recent WA state budget projects growth of 0.8 per cent in WA’s working population during 2021-22.

It’s hard to see how growing labour demands across a number of WA’s industry sectors will be met without stronger population growth during the coming year.

The state’s future health, border and population strategies are necessarily informed by a number of realities. First, any notion that hard borders will protect the state indefinitely from COVID-19 infection is misplaced. Second, lockdowns are costly, whether measured in economic, social or indeed health grounds. And third, the opportunity costs to WA from delays in meeting generally accepted targets for vaccination coverage are potentially severe.

WA’s 2021-22 state budget anticipates a net outflow in the 2022-23 of household spending once interstate and international borders reopen. This draws on an expectation that the value to the state from tourism, visitors and migrants to WA will be more than offset by higher spending from Western Australians on interstate and overseas travel.

Whether this turns out to be the case remains to be seen, but in any event it will be a short-term problem. More importantly, Western Australia risks being left behind by other states within Australia, and other countries around the world, that are making moves to live with the COVID-19 virus.

The government’s hard border stance coupled with international border closures have closed off a vital source of skilled labour for the state, preventing businesses from recruiting the workers they need to keep pace with growing demand as more economies start to open. Low worker mobility and skilled labour shortages will also make the state less attractive to business investors. And for many migrant workers currently in WA, an inability to travel to visit family and friends in their home nation, or an inability to holiday abroad could make WA a less attractive place to work and live.

If the WA community continues to show complacency in getting fully vaccinated, the state runs a very real risk of losing skilled workers, tourists and students to other states and jurisdictions that have moved more quickly to raise vaccination rates, and have opened up faster as a result.