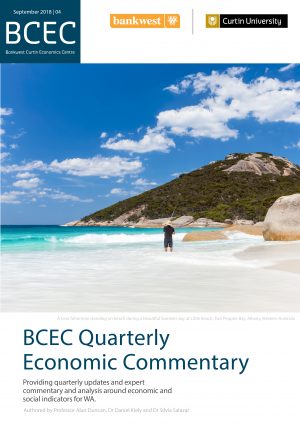 This Western Australia Quarterly Economic Commentary analyses the most recent data on economic and social indicators for WA, as at the end of Q3 2018.

This quarter we explore a return to negative business investment growth, and the impact of low population and wage growth on consumption demand. We provide a feature on employment and demographic trends, and steps towards building better business in the Mid West region.

Like the soaring Eagles, can the wings of the WA economy be unclipped?

Economic activity, as measured by state final demand (SFD), was down by 0.4% in the quarter to June 2018, driven by declines in business and public investment, with weak private consumption growth and growth in public consumption insufficient to offset the latter. While there were some positive signs that declines in business investment in WA had bottomed out in the middle of 2017, the last three quarters have returned to negative business investment growth. This is driven by a return to large falls in non-dwelling construction – the main contributing factor to the ‘boom years’, with the latter now at its lowest level since September 2006.

Difficult times for retail trade. But, will the Federal Government’s income tax light shine through?

Household consumption is a key component of WA’s economic growth, comprising more than 50% of State Final Demand and around 40% of Gross State Product. The latest June quarter figures show WA household consumption remains positive, but only just, growing by 0.1% since March 2018. Nationally, household consumption growth during this same period has measured a reasonably strong 0.7%. This low household consumption pattern is linked to the weakness we are also seeing in the WA labour market, which is currently being held up by part-time jobs. The labour market will need to pick up notably if we are to see any gains in this indicator over the coming quarters.

The Mid West region covers over one fifth of WA’s land area, and has a diverse economy with mining, agriculture and fishing and tourism being major cornerstones. However, the Mid West community is suffering on the back of a slowdown in the overall state economy. Coupled with the net loss of 400 small businesses, between 2011 and 2016, employment in the Mid West fell by -6.6% to 23,300 people. This was primarily driven by a decline in employment in the construction (-25%), manufacturing (-39%) and Mining (-14%) sectors.