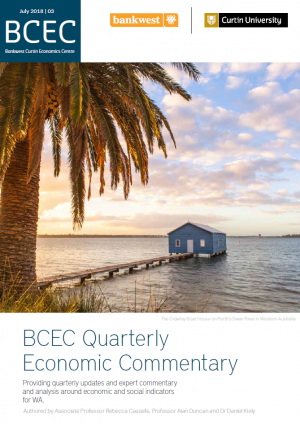 This Western Australia Quarterly Economic Commentary analyses the most recent data on economic and social indicators for WA, as at the end of Q2 2018.

This quarter we explore the modest growth in household consumption, the impact WA’s weaker labour market is having on earnings and what recent the changes to GST arrangements may mean for WA’s economy.

In the quarter to March 2018, the WA economy remained flat, with SFD falling by 0.1%. This is disappointing, particularly coming after a revised growth figure of 0.2% in the previous quarter. Growth across all states has been lower in the latest quarter, but WA was the only state to show negative growth. Household consumption in WA rose by only a modest 0.2%, reflecting lower wage growth and a weaker labour market. This growth was not enough to head off the State’s negative SFD outcome.

The recent change in GST arrangements provides WA with a $2 billion injection into government revenues over the next three years. WA Treasurer Ben Wyatt sees the extra cash as an opportunity
to speed up the State’s return to budget surplus, and is understandably cautious in overcommitting elsewhere. Yet with the WA economy recovery remaining fragile, it will be interesting to see how much scope exists to release funds to boost the State’s capital works program.

What goes up must come down

The WA economy has been on a roller-coaster ride for the last fifteen years. There have been many highs, and many lows, and some would say this is to be expected when you live in a
state with such a high dependency on export commodities.

Wages, Prices, Business Investment, State Output, Household Consumption, Population and the Labour Market have all grown at rates well above national figures during the mid-2000s and early 2010s. But 2014 marked a turning point – major economic indicators began to fall below national trends and have struggled to keep up since. Has WA now come too far the other way and how do we move the West to a steadier state?

The Construction sector in WA has endured a bumpy ride over the last fifteen years. It grew steeply in the mid-2000s as the mining-construction boom escalated, eased rapidly with the onset of the global financial crisis, peaked during 2010-11, before zig-zagging its way towards a dramatic fall in 2016. The good news in the most recent Construction figures, is that growth has now jumped back into the black and is currently close to national figures, with the value of Construction work done increasing by 1.2% in the March 2018 quarter. The number of dwelling approvals, while still in negative growth territory, appear to be entering a steadier state, as demonstrated by the latest monthly figures to May 2018.