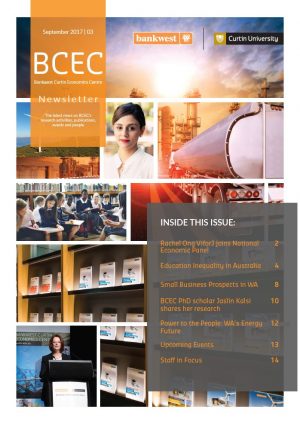 This third edition of the tri-annual BCEC newsletter reports on a very active and successful period during the 2017 calendar year, with BCEC undertaking and delivering a number of research initiatives that have been influential in informing and shaping policy and debate on key economic and social issues that have been brought to the forefront in 2017.

Energy policy is one such issue, with the BCEC’s Power to the People report released at a time when energy security and affordability have become critical and divisive issues across Australia. In delivering evidence to the House of Representatives Standing Committee shortly after the release of this report, BCEC emphasised the need for a clear road map to navigate our way to a new energy future – one that integrates and exploits to the greatest efficiency possible a combination of existing non-renewable generation capacity and the rapidly growing renewable energy sector.

Our research into WA’s small businesses, including the commissioning of a unique BCEC Small Business Survey, has also played an important role in informing policy and debate in this area. Small businesses are the backbone of the WA economy, and need to be supported and understood as much as possible. Our survey found that more than half of WA’s small businesses experience late payments from larger businesses, and I was pleased to see the Business Council of Australia announce a new voluntary code to speed up payment terms to small business suppliers.

The importance of research that engages policy and decision makers is a message BCEC Director Professor Alan Duncan has been spreading both here in Australia and internationally through his recent visit to the World Bank in Washington DC, teaching the elements of a well-functioning tax and transfer system to international tax policymakers. Alan was also invited to be part of an International Monetary Fund expert mission to China, where he provided advice to the Chinese government on the most effective income tax and social security settings to drive employment growth and incentivise small businesses across China’s provinces.