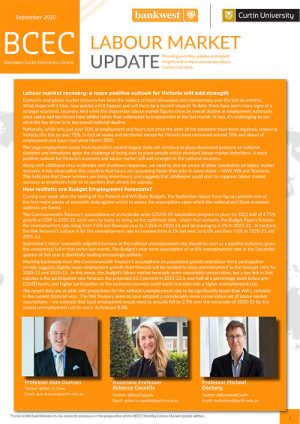 Economic and labour market recovery has been the subject of much discussion and commentary over the last six months. What shape will it take, how quickly will it happen and will there be a second impact? To date, there have been many signs of a stronger economic recovery. And while the September labour market figures show an overall decline in employment nationally, most states and territories have added rather than subtracted to employment in the last month. In fact, it’s challenging to see what the key driver is to the overall national decline.

The large employment losses from Australia’s second largest state will continue to place downward pressure on national statistics and introduces again the challenge of being able to place people within standard labour market definitions. A more positive outlook for Victoria’s economy and labour market will add strength to the national recovery.

Along with additional virus outbreaks and shutdown responses, we need to also be aware of other constraints on labour market recovery. A key observation this month is that hours are recovering faster than jobs in some states – NSW, WA and Tasmania. This indicates that fewer workers are doing more hours, and suggests that JobKeeper could start to suppress labour market recovery as employers hold on to workers that attract the subsidy.

How realistic are Budget Employment Forecasts?

Coming one week after the tabling of the Federal and WA State Budgets, the September labour force figures provide one of the first major pieces of economic data against which to assess the assumptions upon which the national and State economic outlooks are based.

September’s minor seasonally-adjusted increase in the national unemployment rate should be seen as a positive outcome, given the unexpected fall in that series last month. The Budget’s near-term expectation of an 8% unemployment rate in the December quarter of this year is thankfully looking increasingly unlikely.

Working backwards from the Commonwealth Treasury’s assumptions on population growth and labour force participation already suggests slightly lower employment growth than forecast will be needed to keep unemployment to the forecast rates for 2020-21 and 2021-22.  In this sense, the Budget’s labour market forecasts seem reasonably conservative, but a key link in that calculus is the participation rate forecast: the projected 65.5 percent in 2021-22 is one-half of a percentage point below pre-COVID levels, and higher participation as the economy recovers could easily translate into a higher unemployment rate.

The recent data are at odds with projections for the national unemployment rate to be significantly lower than WA’s, certainly in the current financial year.  The WA Treasury seem to have adopted a considerably more conservative set of labour market assumptions – we estimate that total employment would need to actually fall by 2.5% over the remainder of 2020-21 for the annual unemployment rate to reach its forecast 8.0%.