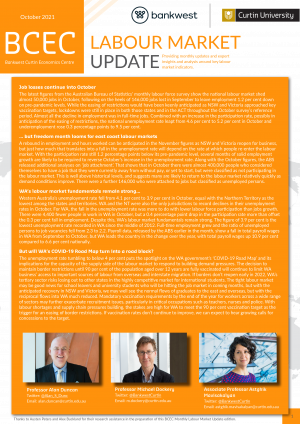 The latest figures from the Australian Bureau of Statistics’ monthly labour force survey show the national labour market shed almost 50,000 jobs in October, following on the heels of 146,000 jobs lost in September to leave employment 1.2 per cent down on pre-pandemic levels.

While the easing of restrictions would have been keenly anticipated as NSW and Victoria approached key vaccination targets, lockdowns were still in place in both those states and in the ACT throughout the October survey’s reference period.

Almost all the decline in employment was in full-time jobs. Combined with an increase in the participation rate, possibly in anticipation of the easing of restrictions, the national unemployment rate leapt from 4.6 per cent to 5.2 per cent in October and underemployment rose 0.3 percentage points to 9.5 per cent.

A rebound in employment and hours worked can be anticipated in the November figures as NSW and Victoria reopen for business, but just how much that translates into a fall in the unemployment rate will depend on the rate at which people re-enter the labour market.

With the participation rate still 1.2 percentage points below its pre-pandemic level, several months of solid employment growth are likely to be required to reverse October’s increase in the unemployment rate.

Along with the October figures, the ABS released additional analyses on ‘job attachment’. That shows that in October there were almost 400,000 people who considered themselves to have a job that they were currently away from without pay, or yet to start, but were classified as not participating in the labour market.

This is well above historical levels, and suggests many are likely to return to the labour market relatively quickly as demand conditions improve. There were a further 146,000 who were attached to jobs but classified as unemployed persons.

Western Australia’s unemployment rate fell from 4.1 per cent to 3.9 per cent in October, equal with the Northern Territory as the lowest among the states and territories. WA and the NT were also the only jurisdictions to record declines in their unemployment rates in October.

For WA, the fall in the unemployment rate was more to do with lower labour force participation than jobs growth.

There were 4,400 fewer people in work in WA in October, but a 0.4 percentage point drop in the participation rate more than offset the 0.3 per cent fall in employment. Despite this, WA’s labour market fundamentals remain strong. The figure of 3.9 per cent is the lowest unemployment rate recorded in WA since the middle of 2012.

Full-time employment grew and the ratio of unemployed persons to job vacancies fell from 2.3 to 2.2.

But will WA’s COVID-19 Road Map turn into a road block?

The unemployment rate tumbling to below 4 per cent puts the spotlight on the WA government’s ‘COVID-19 Road Map’ and its implications for the capacity of the supply side of the labour market to respond to building demand pressures.

The decision to maintain border restrictions until 90 per cent of the population aged over 12 years are fully vaccinated will continue to limit WA business’ access to important sources of labour from overseas and interstate migration.

If borders don’t reopen early in 2022, WA’s tertiary sector risks losing out to other states in the highly competitive market for international students.

The tight labour market may be good news for school leavers and university students who will be hitting the job market in coming months, but with the anticipated recovery in NSW and Victoria, we may well see the normal flows of graduates to the east and overseas, but with the reciprocal flows into WA much reduced.

Mandatory vaccination requirements by the end of the year for workers across a wide range of sectors may further exacerbate recruitment issues, particularly in critical occupations such as teachers, nurses and police.

With labour shortages and supply chain pressures building, the stakes are high for WA to meet the 90 per cent vaccination target as the trigger for an easing of border restrictions.

If vaccination rates don’t continue to improve, we can expect to hear growing calls for concessions to the target.