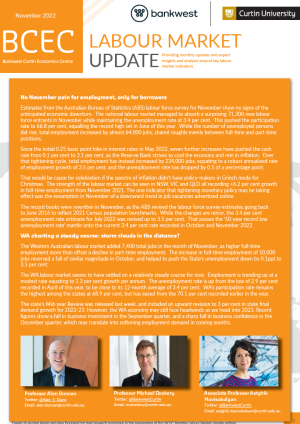 No November pain for employment, only for borrowers

Estimates from the Australian Bureau of Statistics (ABS) labour force survey for November show no signs of the anticipated economic downturn. The national labour market managed to absorb a surprising 71,300 new labour force entrants in November while maintaining the unemployment rate at 3.4 per cent. This pushed the participation rate to 66.8 per cent, equalling the record high set in June of this year. While the number of unemployed persons did rise, total employment increased by almost 64,000 jobs, shared roughly evenly between full-time and part-time positions.

Since the initial 0.25 basis point hike in interest rates in May 2022, seven further increases have pushed the cash rate from 0.1 per cent to 3.1 per cent, as the Reserve Bank strives to cool the economy and rein in inflation. Over that tightening cycle, total employment has instead increased by 234,000 jobs, equating to a robust annualised rate of employment growth of 3.5 per cent, and the unemployment rate has dropped by 0.5 of a percentage point.

That would be cause for celebration if the spectre of inflation didn’t have policy-makers in Grinch mode for Christmas. The strength of the labour market can be seen in NSW, VIC and QLD all recording +6.2 per cent growth in full-time employment from November 2021. The one indicator that tightening monetary policy may be taking effect was the resumption in November of a downward trend in job vacancies advertised online.

The record books were rewritten in November, as the ABS revised the labour force survey estimates going back to June 2016 to reflect 2021 Census population benchmarks. While the changes are minor, the 3.4 per cent unemployment rate estimate for July 2022 was revised up to 3.5 per cent. That passes the ‘50-year record low unemployment rate’ mantle onto the current 3.4 per cent rate recorded in October and November 2022.

WA charting a steady course: storm clouds in the distance?

The Western Australian labour market added 7,400 total jobs in the month of November, as higher full-time employment more than offset a decline in part-time employment. The increase in full time employment of 10,000 jobs reversed a fall of similar magnitude in October, and helped to push the State’s unemployment down by 0.1ppt to 3.5 per cent.

The WA labour market seems to have settled on a relatively steady course for now. Employment is trending up at a modest rate equating to 1.3 per cent growth per annum. The unemployment rate is up from the low of 2.9 per cent recorded in April of this year, to be close to its 12-month average of 3.4 per cent. WA’s participation rate remains the highest among the states at 68.9 per cent, but has eased from the 70.1 per cent recorded earlier in the year.

The state’s Mid-year Review was released last week, and included an upward revision to 3 per cent in state final demand growth for 2022-23. However, the WA economy may still face headwinds as we head into 2023. Recent figures show a fall in business investment in the September quarter, and a sharp fall in business confidence in the December quarter, which may translate into softening employment demand in coming months.