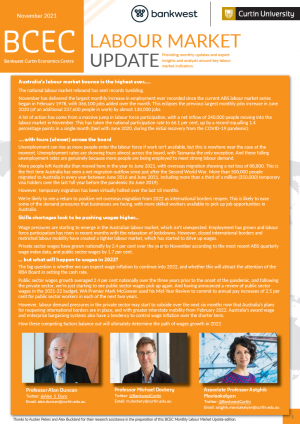 Australia’s labour market bounce is the highest ever…..

November has delivered the largest monthly increase in employment ever recorded since the current ABS labour market series began in February 1978, with 366,100 jobs added over the month. This eclipses the previous largest monthly jobs increase in June 2020 (of an additional 237,600 people in work) by almost 130,000 jobs.

A lot of action has come from a massive jump in labour force participation, with a net inflow of 340,000 people moving into the labour market in November. This has taken the national participation rate to 66.1 per cent, up by a record-equalling 1.4 percentage points in a single month (tied with June 2020, during the initial recovery from the COVID-19 pandemic).

….with fours (almost) across the board

More people left Australia than moved here in the year to June 2021, with overseas migration showing a net loss of 88,800. This is the first time Australia has seen a net migration outflow since just after the Second World War. More than 500,000 people migrated to Australia in every year between June 2016 and June 2021, including more than a third of a million (350,000) temporary visa holders over the last full year before the pandemic (to June 2019).

However, temporary migration has been virtually halted over the last 18 months.

We’re likely to see a return to positive net overseas migration from 2022 as international borders reopen. This is likely to ease some of the demand pressures that businesses are facing, with more skilled workers available to pick up job opportunities in Australia.

Wage pressures are starting to emerge in the Australian labour market, which isn’t unexpected. Employment has grown and labour force participation has risen in recent months with the relaxation of lockdowns. However, closed international borders and restricted labour mobility have created a tighter labour market, which has started to drive up wages.

Private sector wages have grown nationally by 2.4 per cent over the year to November according to the most recent ABS quarterly wage index data, and public sector wages by 1.7 per cent.

The big question is whether we can expect wage inflation to continue into 2022, and whether this will attract the attention of the RBA Board in setting the cash rate.

Public sector wages growth averaged 2.4 per cent nationally over the three years prior to the onset of the pandemic, and following the private sector, we’re just starting to see public sector wages pick up again. And having announced a review of public sector wages in the 2021-22 budget, WA Premier Mark McGowan used his Mid-Year Review to commit to annual pay increases of 2.5 per cent for public sector workers in each of the next two years.

However, labour demand pressures in the private sector may start to subside over the next six months now that Australia’s plans for reopening international borders are in place, and with greater interstate mobility from February 2022. Australia’s award wage and enterprise bargaining systems also have a tendency to control wage inflation over the shorter term.

How these competing factors balance out will ultimately determine the path of wages growth in 2022.