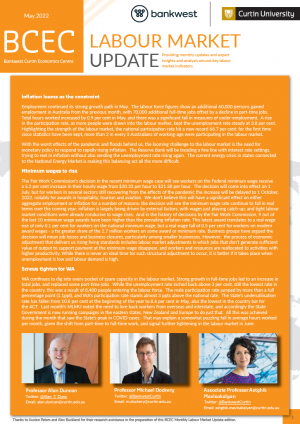 Inflation looms as the constraint

Employment continued its strong growth path in May. The labour force figures show an additional 60,000 persons gained employment in Australia from the previous month, with 70,000 additional full-time jobs offset by a decline in part-time jobs. Total hours worked increased by 0.9 per cent in May, and there was a significant fall in measures of under-employment. A rise in the participation rate, as more people were drawn into the labour market, kept the unemployment rate steady at 3.8 per cent. Highlighting the strength of the labour market, the national participation rate hit a new record 66.7 per cent: for the first time since statistics have been kept, more than 2 in every 3 Australians of working-age were participating in the labour market.

With the worst effects of the pandemic and floods behind us, the looming challenge to the labour market is the need for monetary policy to respond to rapidly rising inflation. The Reserve Bank will be treading a fine line with interest rate settings, trying to reel in inflation without also sending the unemployment rate rising again. The current energy crisis in states connected to the National Energy Market is making this balancing act all the more difficult.

The Fair Work Commission’s decision in the recent minimum wage case will see workers on the Federal minimum wage receive a 5.2 per cent increase in their hourly wage from $20.33 per hour to $21.38 per hour. The decision will come into effect on 1 July, but for workers in several sectors still recovering from the effects of the pandemic the increase will be delayed to 1 October, 2022, notably for awards in hospitality, tourism and aviation. We don’t believe this will have a significant effect on either aggregate employment or inflation for a number of reasons: the decision will see the minimum wage rate continue to fall in real terms over the coming year; inflation is largely being driven by external factors, with wages just playing catch-up; and tight labour market conditions were already conducive to wage rises. And in the history of decisions by the Fair Work Commission, 9 out of the last 10 minimum wage awards have been higher than the prevailing inflation rate.

This latest award translates to a real wage rise of only 0.1 per cent for workers on the national minimum wage, but a real wage fall of 0.5 per cent for workers on modern award wages – a far greater share of the 2.7 million workers on some award or minimum rate. Business groups have argued the decision will mean job losses and business closures, particularly among smaller businesses. However, the process of economic adjustment that delivers us rising living standards includes labour market adjustments in which jobs that don’t generate sufficient value of output to support payment at the minimum wage disappear, and workers and resources are reallocated to activities with higher productivity. While there is never an ideal time for such structural adjustment to occur, it is better if it takes place when unemployment is low and labour demand is high.

WA continues to dig into every pocket of spare capacity in the labour market. Strong growth in full-time jobs led to an increase in total jobs, and replaced some part-time jobs. While the unemployment rate inched back above 3 per cent, still the lowest rate in the country, this was a result of 8,400 people entering the labour force. The male participation rate jumped by more than a full percentage point (1.1ppt), and WA’s participation rate stands almost 3 ppts above the national rate. The State’s underutilisation rate has fallen from 10.8 per cent at the beginning of the year to 8.6 per cent in May, also the lowest in the country bar for the ACT. Last month’s MLMU noted the need to lure back workers from overseas and interstate, and accordingly the State Government is now running campaigns in the eastern states, New Zealand and Europe to do just that. All this was achieved during the month that saw the State’s peak in COVID cases. That may explain a somewhat puzzling fall in average hours worked per month, given the shift from part-time to full-time work, and signal further tightening in the labour market in June.