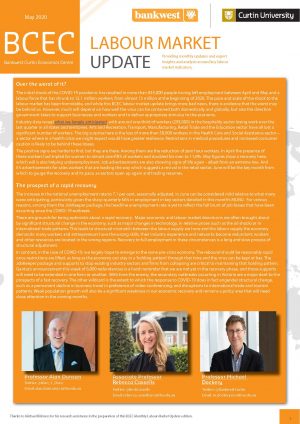 Over the worst of it?

The initial shock of the COVID-19 pandemic has resulted in more than 835,000 people having left employment between April and May and a labour force that has shrunk to 12.1 million workers, from almost 13 million at the beginning of 2020. The pace and scale of the shock to the labour market has been formidable, and while this BCEC labour market update brings more bad news, there is evidence that the worst may be behind us. However, much will depend on how well the virus can be contained both domestically and globally, but also the direction government takes to support businesses and workers and to deliver appropriate stimulus to the economy.

Industry data reveal what we largely anticipated, with around one-third of workers (293,000) in the hospitality sector losing work over the last quarter in all states and territories. Arts and Recreation, Transport, Manufacturing, Retail Trade and the Education sector have all lost a significant number of workers. The big surprise here is the loss of more than 50,000 workers in the Health Care and Social Assistance sector – a sector where in a health crisis we might expect would have greater resilience. Restrictions in medical procedures and increased consumer caution is likely to be behind these losses.

The positive signs are harder to find, but they are there. Among them are the reduction of zero hour workers. In April the presence of these workers had tripled for women to almost one-fifth of workers and doubled for men to 11.6%. May figures show a recovery here, which will is also helping underemployment. Job advertisements are also showing signs of life again – albeit from an extreme low. And it’s advertisements for sales workers that are leading the way which suggests a revival in the retail sector. June will be the key month from which to gauge the recovery and its pace, as sectors open up again and trading resumes.

The prospect of a rapid recovery

The increase in the national unemployment rate to 7.1 per cent, seasonally adjusted, in June can be considered mild relative to what many were anticipating, particularly given the sharp quarterly falls in employment in key sectors detailed in this month’s MLMU.  For various reasons, among them the JobKeeper package, the headline unemployment rate is yet to reflect the full brunt of job losses that have been occurring since the COVID-19 outbreak.

There are grounds for being optimistic about a rapid recovery.  Major economic and labour market downturns are often brought about by significant structural change in the economy, such as major changes in technology, in relative prices (such as the oil shock) or in international trade patterns. This leads to structural mismatch between the labour supply we have and the labour supply the economy demands: many workers and entrepreneurs have the wrong skills, their industry experience and networks become redundant; workers and other resources are located in the wrong regions. Recovery to full employment in these circumstances is a long and slow process of structural adjustment.

In contrast, in the case of COVID-19, we largely hope to emerge to the same pre-crisis economy. The rebound should be reasonably rapid once restrictions are lifted, as long as the economy can stay in a ‘holding pattern’ through that time and the virus can be kept at bay. The JobKeeper package and supports to stop existing industry sectors and firms from collapsing are critical to maintaining that holding pattern. Qantas’s announcement this week of 6,000 redundancies is a harsh reminder that we are not yet in the recovery phase, and those supports will need to be extended in one form or another.  With time the enemy, the secondary outbreaks occurring in Victoria are a major dent to the prospects of a fast recovery. The other wildcard is the extent to which the response to COVID-19 does in fact engender structural change, such as a permanent decline in business travel in preference of video-conferencing, and disruptions to international trade and tourism patterns. Weak population growth will also be a significant weakness in our economic recovery and remains a policy area that will need close attention in the coming months.