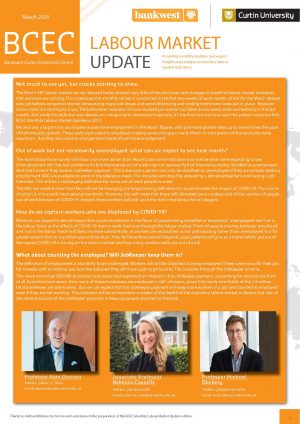 Key findings from March 2020 data include:

Not much to see yet, but cracks starting to show
The March ABS labour market survey released today showed very little of the job losses and changes to headline labour market indicators that we know are coming. This is because the monthly survey is conducted in the first two weeks of each month, which for the March release was just before companies started announcing major job losses and social distancing and trading restrictions were put in place.

However some cracks are starting to show. The bellwether indicator of hours worked per worker has fallen across every state and territory in the last month. And while this indicator was already on a longer-term downward trajectory, it’s the first time we have seen this pattern since our first BCEC Monthly Labour Market Update in 2017.

We also saw a larger than usual spike in part-time employment in the March figures, with part-time growth rates up to seven times the pace of full-time jobs growth. These early signs point to employers making some changes in early March in anticipation of the economy-wide downturn. But they also point to a longer-term trend of part-time employment.

Out of work but not necessarily unemployed: what can we expect to see next month?
The April labour force survey will show a lot more action than March’s, but some indicators may not be what we’re expecting to see.

Unemployment will rise, but workers who find themselves out of a job may not necessarily find themselves being classified as unemployed. And that’s even if they receive JobSeeker payment. This is because a person can only be classified as unemployed if they are actively seeking employment AND are available to work in the reference week. This includes activities like answering a job advertisement and having a job interview. This will be a challenging definition for many out of work people to meet.

The ABS has made it clear that they will not be changing any longstanding definitions to accommodate the impact of COVID-19. This course of action is in line with international standards. However, this will mean that there will ultimately be an undercount of the number of people out of work because of COVID-19. Instead, these workers will end up in the ‘not in the labour force’ category.

How do we capture workers who are displaced by COVID-19?
What we can expect to see are larger than usual movements in the flows of people being classified as ‘employed’, ‘unemployed’ and ‘not in the labour force’ as the effects of COVID-19 start to work their way through the labour market. Flows of people moving between ’employed’ and ‘not in the labour force’ will likely increase substantially, as workers are reclassified as not participating rather than unemployed to a far greater extent than in any other typical downturn. How far these flows extend beyond usual patterns will give us a more holistic picture of the impact COVID-19 is having on the labour market and how many workers really are out of a job.

What about counting the employed? Will JobKeeper keep them in?
The definition of employment is also likely to be challenged. Workers will still be classified as being employed if they were away for their job for 4 weeks with or without pay but they believed they still have a job to go back to. This includes through the JobKeeper scheme.