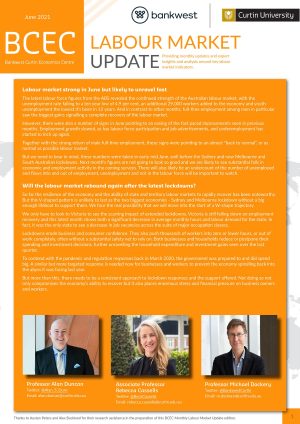 Labour market strong in June but likely to unravel fast

The latest labour force figures from the ABS revealed the continued strength of the Australian labour market, with the unemployment rate falling to a ten year low of 4.9 per cent, an additional 29,000 workers added to the economy and youth unemployment the lowest it’s been in 12 years. And in contrast to other months, full-time employment among men in particular saw the biggest gains signalling a complete recovery of the labour market.

However, there were also a number of signs in June pointing to an easing of the fast paced improvements seen in previous months. Employment growth slowed, as has labour force participation and job advertisements, and underemployment has started to inch up again.

Together with the strong return of male full-time employment, these signs were pointing to an almost “back to normal”, or as normal as possible labour market.

But we need to bear in mind, these numbers were taken in early-mid June, well before the Sydney and now Melbourne and South Australian lockdowns. Next month’s figures are not going to look so good and we are likely to see substantial falls in economic and employment activity in the coming surveys. There will also likely be an undercount of the number of unemployed and flows into and out of employment, unemployment and not in the labour force will be important to watch.

Will the labour market rebound again after the latest lockdowns?

So far the resilience of the economy and the ability of state and territory labour markets to rapidly recover has been noteworthy. But this V-shaped pattern is unlikely to last as the two biggest economies – Sydney and Melbourne lockdown without a big enough lifeboat to support them. We face the real possibility that we will move into the start of a W-shape trajectory.

We only have to look to Victoria to see the scarring impact of extended lockdowns. Victoria is still falling down on employment recovery and this latest month shows both a significant decrease in average monthly hours and labour demand for the state. In fact, it was the only state to see a decrease in job vacancies across the suite of major occupation classes.

Lockdowns erode business and consumer confidence. They also push thousands of workers into zero or lower hours, or out of work completely, often without a substantial safety net to rely on. Both businesses and households reduce or postpone their spending and investment decisions, further unravelling the household expenditure and investment gains seen over the last quarter.

To contend with the pandemic and regulation responses back in March 2020, the government was prepared to and did spend big. A similar but more targeted response is needed now for businesses and workers to prevent the economy spiralling back into the abyss it was facing last year.

But more than this, there needs to be a consistent approach to lockdown responses and the support offered. Not doing so not only compromises the economy’s ability to recover but it also places enormous stress and financial pressure on business owners and workers.