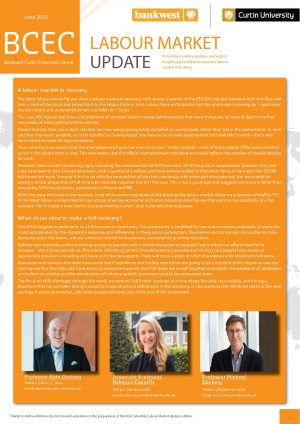 A labour market in recovery

The latest labour market figures show a labour market in recovery, with almost a quarter of the 835,000 jobs lost between April and May, and over a third of the hours lost added back to the labour force in June. Labour force participation has also improved increasing by 1.3ppts over the last month and underemployment has fallen by 1.5ppts.

The June ABS figures also show a recalibration of standard labour market definitions and that some things are (or were at least in the first two weeks of June) getting back to normal.

People that lost their job in April and May are now being appropriately classified as unemployed, rather than ‘not in the labour force’.  In April and May this wasn’t possible, as to be classified as “unemployed” you have to be actively seeking work and available to work – that’s very hard criteria to meet during a pandemic.

This is also the main reason that the unemployment figure has risen to almost 1 million people – most of these people (70%) were classified as not in the labour force in May. This also means that the official unemployment rate more accurately reflects the number of people looking for work.

However, there are still concerning signs, including the continued loss of full-time work. All of the gains in employment between May and June have been in part-time employment, with a quarter of a million part-time workers added to the labour force, while more than 38,000 full-timers lost work. Some of this is to do with the composition of jobs lost previously, with more part-time jobs lost, but we should be seeing a similar proportion of full-time jobs returned, however this isn’t the case. This is not a good sign and suggests permanent rather than temporary full-time job losses, particularly in Victoria and WA.

While the pace and scale of the recovery is not of the same magnitude of the shock to the labour market, there are a number of healthy “V’s” in the latest labour market statistics and across other key economic indicators including retail figures that point to the possibility of a fast recovery. This V-shape is now heavily compromised by current virus outbreaks and responses.

What do we need to make a full recovery?

One of the biggest impediments to a full recovery is uncertainty. This uncertainty is amplified by new and increasing outbreaks. Uncertainty is also exacerbated by the regulatory response and differences in these across jurisdictions. Businesses and consumers are unable to make decisions about the future, and are unable to commit to investment, consumption or hiring decisions.

Getting new outbreaks under control as quickly as possible with minimal disruption to people’s lives is where our efforts need to be focussed – and microscopically so. This means identifying points of weaknesses in processes and making sure people have access to appropriate provisions including sick leave and income supports. There will come a point at which the tolerance for lockdowns will wane.

Businesses and workers also need assurances that if lockdowns and trading restrictions are going to be a standard policy response over the coming months, that they also have access to adequate supports and that these are as well targeted as possible. The extension of JobKeeper in one form or another and the introduction of industry-specific assistance need to be announced soon.

The focus on skills shortages through the newly announced “JobTrainer” package at a time where few jobs are available, and during a downturn that has not been brought about by major structural deficiencies in the economy, is also questionable. While the detail of the new package is yet to be revealed, ultimately people will need jobs at the end of this investment.