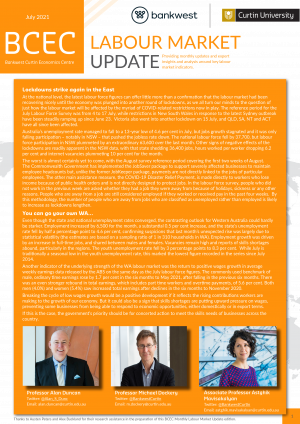 Lockdowns strike again in the East

At the national level, the latest labour force figures can offer little more than a confirmation that the labour market had been recovering nicely until the economy was plunged into another round of lockdowns, as we all turn our minds to the question of just how the labour market will be affected by the myriad of COVID-related restrictions now in play. The reference period for the July Labour Force Survey was from 4 to 17 July, while restrictions in New South Wales in response to the latest Sydney outbreak have been steadily ramping up since June 23. Victoria also went into another lockdown on 15 July, and QLD, SA, NT and ACT have all since been affected.

Australia’s unemployment rate managed to fall to a 13-year low of 4.6 per cent in July, but jobs growth stagnated and it was only falling participation – notably in NSW – that pushed the jobless rate down. The national labour force fell by 37,700, but labour force participation in NSW plummeted by an extraordinary 63,600 over the last month. Other signs of negative effects of the
lockdowns are readily apparent in the NSW data, with that state shedding 36,400 jobs, hours worked per worker dropping 6.2 per cent and internet vacancies plummeting 10 per cent for the month.

The worst is almost certainly yet to come, with the August survey reference period covering the first two weeks of August. The Commonwealth Government has implemented the JobSaver package to support severely affected businesses to maintain employee headcounts but, unlike the former JobKeeper package, payments are not directly linked to the jobs of particular employees. The other main assistance measure, the COVID-19 Disaster Relief Payment, is made directly to workers who lose income because of public health orders and is not directly designed to protect jobs. In the labour force survey, people who did not work in the previous week are asked whether they had a job they were away from because of holidays, sickness or any other reasons. People who are away from a job are still considered employed if they worked or received pay in the past four weeks. By this methodology, the number of people who are away from jobs who are classified as unemployed rather than employed is likely to increase as lockdowns lengthen.

You can go your own WA…

Even though the state and national unemployment rates converged, the contrasting outlook for Western Australia could hardly be starker. Employment increased by 6,500 for the month, a substantial 0.5 per cent increase, and the state’s unemployment rate fell by half a percentage point to 4.6 per cent, confirming suspicions that last month’s unexpected rise was largely due to
statistical volatility (the estimates are based on a sampling ratio of 1 in 310 households in WA). Employment growth was driven by an increase in full-time jobs, and shared between males and females. Vacancies remain high and reports of skills shortages abound, particularly in the regions. The youth unemployment rate fell by 3 percentage points to 8.3 per cent. While July is
traditionally a seasonal low in the youth unemployment rate, this marked the lowest figure recorded in the series since July 2014.

Another indicator of the underlying strength of the WA labour market was the return to positive wages growth in average weekly earnings data released by the ABS on the same day as the July labour force figures. The commonly used benchmark of male, ordinary time earnings rose by 1.7 per cent in the six months to May 2021, after falling in the previous six months. There was an even stronger rebound in total earnings, which includes part time workers and overtime payments, of 5.6 per cent. Both men (4.0%) and women (5.4%) saw increased total earnings after declines in the six months to November 2020.

Breaking the cycle of low wages growth would be a positive development if it reflects the rising contributions workers are making to the growth of our economy. But it could also be a sign that skills shortages are putting upward pressure on wages, preventing some businesses from being able to respond to economic opportunities, either domestically or in export terms.

If this is the case, the government’s priority should be for concerted action to meet the skills needs of businesses across the country.