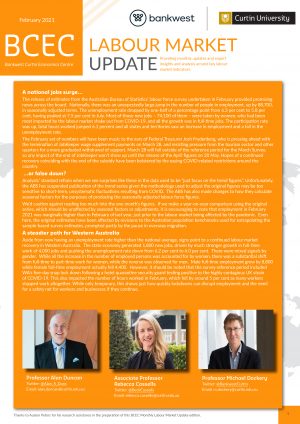 The release of estimates from the Australian Bureau of Statistics’ labour force survey undertaken in February provided promising news across the board. Nationally, there was an unexpectedly large jump in the number of people in employment, up by 88,700, in seasonally adjusted terms. The unemployment rate dropped by one-half of a percentage point from 6.3 per cent to 5.8 per
cent, having peaked at 7.5 per cent in July. Most of those new jobs – 74,100 of them – were taken by women, who had been most impacted by the labour market shake out from COVID-19, and all the growth was in full-time jobs. The participation rate was up, total hours worked jumped 6.1 percent and all states and territories saw an increase in employment and a fall in the
unemployment rate.

The February set of numbers will have been music to the ears of Federal Treasurer Josh Frydenberg, who is pressing ahead with the termination of JobKeeper wage supplement payments on March 28, and resisting pressure from the tourism sector and other quarters for a more graduated withdrawal of support. March 28 will fall outside of the reference period for the March Survey,
so any impact of the end of JobKeeper won’t show up until the release of the April figures on 20 May. Hopes of a continued recovery coinciding with the end of the subsidy have been bolstered by the easing COVID-related restrictions around the country.

Analysts’ standard refrain when we see surprises like these in the data used to be “just focus on the trend figures”. Unfortunately, the ABS has suspended publication of the trend series given the methodology used to adjust the original figures may be too sensitive to short-term, unsystematic fluctuations resulting from COVID. The ABS has also made changes to how they calculate
seasonal factors for the purposes of producing the seasonally adjusted labour force figures.

We’d caution against reading too much into the one month’s figures. If we make a year-on-year comparison using the original series, which should be unaffected by seasonal factors or adjustments, it is encouraging to note that employment in February 2021 was marginally higher than in February of last year, just prior to the labour market being affected by the pandemic. Even
here, the original estimates have been affected by revisions to the Australian population benchmarks used for extrapolating the sample-based survey estimates, prompted partly by the pause in overseas migration.

A steadier path for Western Australia

Aside from now having an unemployment rate higher than the national average, signs point to a continued labour market recovery in Western Australia. The state economy generated 1,800 new jobs, driven by much stronger growth in full-time work of 4,000 jobs and pushing the unemployment rate down from 6.2 per cent to 6.0 per cent. There were mixed signals by gender. While all the increase in the number of employed persons was accounted for by women, there was a substantial shift from full-time to part-time work for women, while the reverse was observed for men. Male full-time employment grew by 8,800 while female full-time employment actually fell 4,400. However, it should be noted that the survey reference period included WA’s five-day snap lock down following a hotel quarantine security guard testing positive to the highly contagious UK strain of COVID-19. This also impacted the number of hours worked in February, which fell by around 5 per cent as many workers stopped work altogether. While only temporary, this shows just how quickly lockdowns can disrupt employment and the need for a safety net for workers and businesses if they continue.