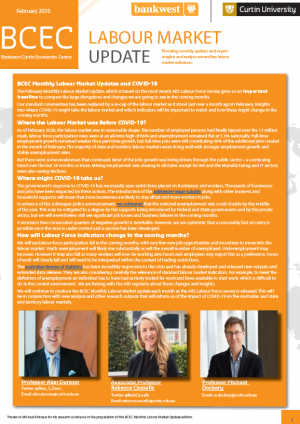 Key findings from February 2020 data include:

BCEC Monthly Labour Market Updates and COVID-19
The February Monthly Labour Market Update, which is based on the most recent ABS Labour Force Survey gives us an important baseline to compare the large disruptions and changes we are going to see in the coming months. Our standard commentary has been replaced by a re-cap of the labour market as it stood just over a month ago in February, insights into where COVID-19 might take the labour market and which indicators will be important to watch and how these might change in the coming months.

Where the Labour Market was Before COVID-19?
As of February 2020, the labour market was in reasonable shape. The number of employed persons had finally tipped over the 13 million mark, labour force participation rates were at an all-time high of 66% and unemployment remained flat at 5.1% nationally. Full-time employment growth remained weaker than part-time growth, but full-time jobs were still constituting 60% of the additional jobs created in the month of February. The majority of state and territory labour markets were doing well with stronger employment growth and stable unemployment rates. But there were some weaknesses that continued. Most of the jobs growth was being driven through the public sector – a continuing trend over the last 18 months or more. Mining employment was slowing in all states except for WA and the Manufacturing and IT sectors were also seeing declines.

Where might COVID-19 take us?
The government’s response to COVID-19 has necessarily seen restrictions placed on businesses and workers. Thousands of businesses and jobs have been impacted by these actions. The introduction of the JobKeeper wage subsidy along with other business and household supports will mean that more businesses are likely to stay afloat and more workers in jobs. In advance of the JobKeeper policy announcement, we estimated that the national unemployment rate could double by the middle
of the year. This may be mitigated to a degree by the supports being introduced by Federal and State governments and by the private sector, but we will nevertheless still see significant job losses and business failures in the coming months. A recession (two consecutive quarters of negative growth) is inevitable. However, we are optimistic that a reasonably fast recovery is possible once the virus is under control and a vaccine has been developed.

How will Labour Force Indicators change in the coming months?
We will see labour force participation fall in the coming months, with very few new job opportunities and incentives to move into the labour market. Youth unemployment will likely rise substantially as will the overall number of unemployed. Underemployment may increase. However it may also fall as many workers will now be working zero hours and employees may report this as a preference. Hours of work will clearly fall and will need to be interpreted within the context of trading restrictions. The Australian Bureau of Statistics has been incredibly responsive to the crisis and has already developed and released new outputs and extended data releases. They are also considering carefully the relevance of standard labour market indicators. For example, to meet the definition of unemployment an  individual has to have had actively looked for work and been available to start work, which is difficult to do in the current environment. We are liaising with the ABS regularly about these changes and insights. We will continue to produce the BCEC Monthly Labour Market update each month as the ABS Labour Force survey is released. This will be in conjunction with new analysis and other research outputs that will inform us of the impact of COVID-19 on the Australian and state and territory labour markets.