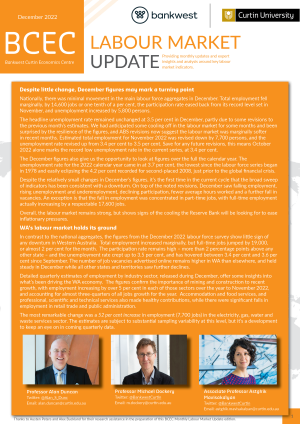 Despite little change, December figures may mark a turning point

Nationally, there was minimal movement in the main labour force aggregates in December. Total employment fell marginally, by 14,600 jobs or one tenth of a per cent, the participation rate eased back from its record level set in November, and unemployment increased by 5,800 persons.

The headline unemployment rate remained unchanged at 3.5 per cent in December, partly due to some revisions to the previous month’s estimates.

We had anticipated some cooling off in the labour market for some months and been surprised by the resilience of the figures, and ABS revisions now suggest the labour market was marginally softer in recent months.

The December figures also give us the opportunity to look at figures over the full the calendar year. The unemployment rate for the 2022 calendar year came in at 3.7 per cent, the lowest since the labour force series began in 1978 and easily eclipsing the 4.2 per cent recorded for second-placed 2008, just prior to the global financial crisis.

Despite the relatively small changes in December’s figures, it’s the first time in the current cycle that the broad sweep of indicators has been consistent with a downturn.

On top of the noted revisions, December saw falling employment, rising unemployment and underemployment, declining participation, fewer average hours worked and a further fall in vacancies. An exception is that the fall in employment was concentrated in part-time jobs, with full-time employment actually increasing by a respectable 17,600 jobs.

Overall, the labour market remains strong, but shows signs of the cooling the Reserve Bank will be looking for to ease inflationary pressures.

In contrast to the national aggregates, the figures from the December 2022 labour force survey show little sign of any downturn in Western Australia. Total employment increased marginally, but full-time jobs jumped by 19,000, or almost 2 per cent for the month.

The participation rate remains high – more than 2 percentage points above any other state – and the unemployment rate crept up to 3.5 per cent, and has hovered between 3.4 per cent and 3.6 per cent since September. The number of job vacancies advertised online remains higher in WA than elsewhere, and held steady in December while all other states and territories saw further declines.

Detailed quarterly estimates of employment by industry sector, released during December, offer some insights into what’s been driving the WA economy. The figures confirm the importance of mining and construction to recent growth, with employment increasing by over 5 per cent in each of those sectors over the year to November 2022, and accounting for almost three-quarters of all jobs growth for the year. Accommodation and food services, and professional, scientific and technical services also made healthy contributions, while there were significant falls in employment in retail trade and public administration.

The most remarkable change was a 52 per cent increase in employment (7,700 jobs) in the electricity, gas, water and waste services sector. The estimates are subject to substantial sampling variability at this level, but it’s a development to keep an eye on in coming quarterly data.