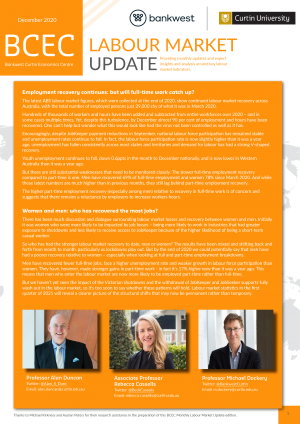 Employment recovery continues: but will full-time work catch up?

The latest ABS labour market figures, which were collected at the end of 2020, show continued labour market recovery across Australia, with the total number of employed persons just 29,000 shy of what it was in March 2020.

Hundreds of thousands of workers and hours have been added and subtracted from entire workforces over 2020 – and in some cases multiple times. Yet, despite this turbulence, by December almost 90 per cent of employment and hours have been recovered. One can’t help but wonder what this would look like had the virus not been controlled as well as it has.

Encouragingly, despite JobKeeper payment reductions in September, national labour force participation has remained stable and unemployment rates continue to fall. In fact, the labour force participation rate is now slightly higher than it was a year ago, unemployment has fallen consistently across most states and territories and demand for labour has had a strong V-shaped recovery.

Youth unemployment continues to fall, down 0.6ppts in the month to December nationally, and is now lower in Western Australia than it was a year ago.

The higher part-time employment recovery (especially among men) relative to recovery in full-time work is of concern and suggests that there remains a reluctance by employers to increase workers hours.

Women and men: who has recovered the most jobs?

There has been much discussion and dialogue surrounding labour market losses and recovery between women and men. Initially it was women who were more likely to be impacted by job losses – being more likely to work in industries that had greater exposure to shutdowns and less likely to receive access to JobKeeper because of the higher likelihood of being a short-term casual worker.

So who has had the stronger labour market recovery to date, men or women? The results have been mixed and shifting back and forth from month to month, particularly as lockdowns play out. But by the end of 2020 we could potentially say that men have had a poorer recovery relative to women – especially when looking at full and part-time employment breakdowns.

Men have recovered fewer full-time jobs, face a higher unemployment rate and weaker growth in labour force participation than women. They have, however, made stronger gains in part-time work – in fact it’s 17% higher now than it was a year ago. This means that men who enter the labour market are now more likely to be employed part-time rather than full-time.

But we haven’t yet seen the impact of the Victorian shutdowns and the withdrawal of JobKeeper and JobSeeker supports fully wash out in the labour market, so it’s too soon to say whether these patterns will hold. Labour market statistics in the first quarter of 2021 will reveal a clearer picture of the structural shifts that may now be permanent rather than temporary.