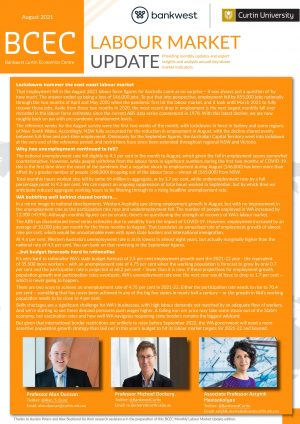 That employment fell in the August 2021 labour force figures for Australia came as no surprise – it was always just a question of ‘by how much’. The answer ended up being a loss of 146,000 jobs. To put that into perspective, employment fell by 855,000 jobs nationally through the two months of April and May 2020 when the pandemic first hit the labour market, and it took until March 2021 to fully recover those jobs. Aside from those two months in 2020, the most recent drop in employment is the next largest monthly fall ever recorded in the labour force estimates since the current ABS data series commenced in 1978. With this latest decline, we are now roughly back on par with pre-pandemic employment levels.

The reference weeks for the August survey were the first two weeks of the month, with lockdowns in force in Sydney and some regions of New South Wales. Accordingly, NSW fully accounted for the reduction in employment in August, with the decline shared evenly between full-time and part-time employment. Ominously for the September figures, the Australian Capital Territory went into lockdown at the very end of the reference period, and restrictions have since been extended throughout regional NSW and Victoria.

Why has unemployment continued to fall?

The national unemployment rate fell slightly to 4.5 per cent in the month to August, which given the fall in employment seems somewhat counterintuitive. However, while people withdrew from the labour force in significant numbers during the first two months of COVID-19, this is the first time since the onset of the pandemic that a negative shock to employment during August (146,000) has been more than offset by a greater number of people (168,000) dropping out of the labour force – almost all (165,000) from NSW.

Total monthly hours worked also fell by some 66 million in aggregate, or by 3.7 per cent, while underemployment rose by a full percentage point to 9.3 per cent. We can expect an ongoing suppression of total hours worked in September, but by which time we anticipate reduced aggregate working hours to be filtering through to a rising headline unemployment rate.

In a mirror image to national developments, Western Australia saw strong employment growth in August, but with no improvement in the unemployment rate as the participation rate rose and underemployment fell. The number of people employed in WA increased by 12,300 (+0.9%). Although monthly figures can be erratic, there’s no questioning the strength of recovery of WA’s labour market.

The ABS has discontinued trend series estimates due to volatility from the impact of COVID-19. However, employment increased by an average of 10,000 jobs per month for the three months to August. That translates an annualised rate of employment growth of almost nine per cent, which would be unsustainable even with open state borders and international immigration.

At 4.6 per cent, Western Australia’s unemployment rate is at its lowest in almost eight years, but actually marginally higher than the national rate of 4.5 per cent. You can bank on that reversing in the September figures.

…but budget forecasts hard to rationalise

It’s very hard to rationalise WA’s state budget forecast of 2.5 per cent employment growth over the 2021-22 year – the equivalent of 35,500 more workers – with an unemployment rate of 4.75 per cent when the working population is forecast to grow by only 0.7 per cent and the participation rate is projected at 68.2 per cent – lower than it is now. If these projections for employment growth, population growth and participation rates eventuate, WA’s unemployment rate over the next year would have to drop to 1.7 per cent – which is never going to happen.

There are two ways to achieve an unemployment rate of 4.75 per cent in 2021-22. Either the participation rate needs to rise to 70.4 per cent – something that has never been achieved in any of the big five states in nearly half a century – or the growth in WA’s working population needs to be close to 4 per cent.

Skills shortages are a significant challenge for WA’s businesses, with high labour demands not matched by an adequate flow of workers. And we’re starting to see these demand pressures push wages higher. A falling iron ore price may take some steam out of the State’s economy, but vaccination rates and how well WA navigates reopening state borders remains the biggest wildcard.
But given that international border restrictions are unlikely to relax before September 2022, the WA government will need a more assertive population growth strategy than laid out in this year’s budget to hit its labour market targets for 2021-22 and beyond.