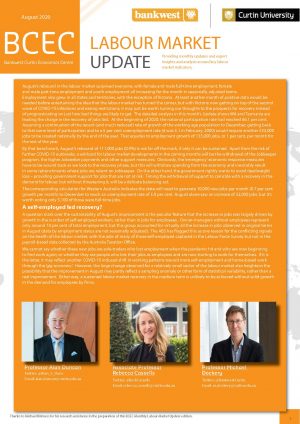 August’s rebound in the labour market surprised everyone, with female and male full-time employment, female and male part-time employment and youth employment all increasing for the month in seasonally adjusted terms. Employment also grew in all states and territories, with the exception of Victoria.  At least another month of positive data would be needed before entertaining the idea that the labour market has turned the corner, but with Victoria now getting on top of the second wave of COVID-19 infections and easing restrictions, it may just be worth turning our thoughts to the prospects for recovery instead of prognosticating on just how bad things are likely to get.  The detailed analysis in this month’s Update shows WA and Tasmania are leading the charge in the recovery of jobs lost.  At the beginning of 2020, the national participation rate had reached 66.1 per cent.  Assuming a continuation of the recent (and much reduced) rate of growth of the working age population to December, getting back to that same level of participation and to a 5 per cent unemployment rate (it was 5.1 in February, 2000) would require another 533,000 jobs to be created nationally by the end of the year.  That equates to employment growth of 133,000 jobs, or 1 per cent, per month for the rest of the year.

By that benchmark, August’s rebound of 111,000 jobs (0.9%) is not far off the mark, if only it can be sustained.  Apart from the risk of further COVID-19 outbreaks, a wildcard for labour market developments in the coming months will be the withdrawal of the Jobkeeper program, the higher Jobseeker payments and other support measures.  Obviously, the ‘emergency’ economic response measures have to be wound back as we look to the recovery phase, but this will withdraw spending from the economy and inevitably result in some retrenchments where jobs are reliant on Jobkeeper.  On the other hand, the government rightly wants to avoid deadweight loss – providing government support for jobs that are not at risk.  Timing the withdrawal of support to coincide with a recovery in the demand for labour, but without threatening it, will be a delicate balancing act.

The corresponding calculation for Western Australia indicates the state will need to generate 10,000 new jobs per month (0.7 per cent growth per month) to December to reach an unemployment rate of 5.0 per cent. August alone saw an increase of 32,000 jobs, but it’s worth noting only 5,100 of those were full-time jobs.

A question mark over the sustainability of August’s improvement is the peculiar feature that the increase in jobs was largely driven by growth in the number of self-employed workers, rather than in jobs for employees.  Owner-managers without employees represent only around 10 per cent of total employment, but this group accounted for virtually all the increase in jobs observed in original terms in August (data by employment status are not seasonally adjusted).  The ABS has flagged this as one reason for the conflicting signals on the health of the labour market, with the jobs of many of those self-employed captured in the Labour Force Survey but not in the payroll-based data collected by the Australia Taxation Office.

We cannot say whether these new jobs are sole-traders who lost employment when the pandemic hit and who are now beginning to find work again; or whether they are people who lost their jobs as employees and are now starting to work for themselves.  If it is the latter, it may reflect another COVID-19 induced shift in working patterns toward more self-employment and home-based work through the ‘gig-economy’.  However, the large change observed for a relatively small sector of the labour market also heightens the possibility that the improvement in August may partly reflect a sampling anomaly or other form of statistical variability, rather than a real improvement.  Either way, a sustained labour market recovery in the medium term is unlikely to be achieved without solid growth in the demand for employees by firms.