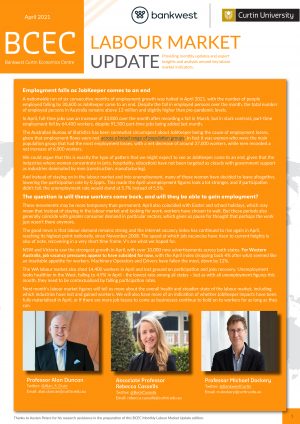 Employment falls as JobKeeper comes to an end

A nationwide run of six consecutive months of employment growth was halted in April 2021, with the number of people employed falling by 30,600 as JobKeeper came to an end. Despite the fall in employed persons over the month, the total number of employed persons in Australia remains above 13 million and slightly higher than pre-pandemic levels.

In April, full-time jobs saw an increase of 33,800 over the month after recording a fall in March, but in stark contrast, part-time employment fell by 64,400 workers, despite 91,500 part-time jobs being added last month.

We could argue that this is exactly the type of pattern that we might expect to see as JobKeeper came to an end, given that the industries where women concentrate in (arts, hospitality, education) have not been targeted as closely with government support as industries dominated by men (construction, manufacturing).

The question is will these workers come back, and will they be able to gain employment? These movements may be more temporary than permanent. April also coincided with Easter and school holidays, which may mean that instead of staying in the labour market and looking for work, workers have chosen to wait. But these periods also generally coincide with greater consumer demand in particular sectors, which gives us pause for thought that perhaps the work just wasn’t there anymore.

The good news is that labour demand remains strong and the internet vacancy index has continued to rise again in April, reaching its highest point nationally, since November 2008. The speed at which job vacancies have risen to current heights is also of note, recovering in a very short time frame. V’s are what we hoped for.

NSW and Victoria saw the strongest growth in April, with over 10,000 new advertisements across both states. For Western Australia, job vacancy pressures appear to have subsided for now, with the April index dropping back 4% after what seemed like an insatiable appetite for workers. Machinery Operators and Drivers have fallen the most, down by 12%.

The WA labour market also shed 14,400 workers in April and lost ground on participation and jobs recovery. Unemployment looks healthier in the West, falling to 4.9% in April – the lowest rate among all states – but as with all unemployment figures this month, they need to be contextualised by falling participation rates.

Next month’s labour market figures will tell us more about the overall health and steadier-state of the labour market, including which industries have lost and gained workers. We will also have more of an indication of whether JobKeeper impacts have been fully materialised in April, or if there are more job losses to come as businesses continue to hold on to workers for as long as they can.