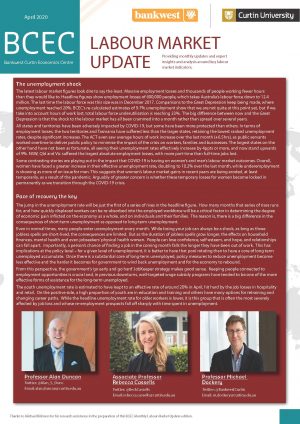 The latest labour market figures look dire to say the least. Massive employment losses and thousands of people working fewer hours than they would like to. Headline figures show employment losses of 600,000 people, which takes Australia’s labour force down to 12.4 million. The last time the labour force was this size was in December 2017.

Comparisons to the Great Depression keep being made, where unemployment reached 20%. BCEC’s re-calculated estimates of 9.7% unemployment show that we are not quite at this point yet, but if we take into account hours of work lost, total labour force underutilisation is reaching 23%.  The big difference between now and the Great Depression is that the shock to the labour market has all been crammed into a month rather than spread over several years.

All states and territories have been adversely impacted by COVID-19, but some have been more protected than others. In terms of employment losses, the two territories and Tasmania have suffered less than the larger states, retaining the lowest ranked unemployment rates, despite significant increases. The ACT even saw average hours of work increase over the last month (+6.5hrs), as public servants worked overtime to deliver public policy to minimise the impact of the crisis on workers, families and businesses.

The largest states on the other hand have not been as fortunate, all seeing their unemployment rates effectively increase by 4ppts or more, and now stand upwards of 9%. NSW, Qld and Vic suffered the largest absolute employment losses, with more part-time than full-time jobs lost.

Some contrasting stories are playing out in the impact that COVID-19 is having on women’s and men’s labour market outcomes. Overall, women have faced a greater increase in their effective unemployment rate, doubling to 10.2% over the last month, while underemployment is showing as more of an issue for men. This suggests that women’s labour market gains in recent years are being eroded, at least temporarily, as a result of the pandemic. Arguably of greater concern is whether these temporary losses for women become locked in permanently as we transition through the COVID-19 crisis.

Pace of recovery the key

The jump in the unemployment rate will be just the first of a series of rises in the headline figure.  How many months that series of rises runs for, and how quickly displaced workers can be re-absorbed into the employed workforce will be a critical factor in determining the degree of economic pain inflicted on the economy as a whole, and on individuals and their families.  The reason is, there is a big difference in the consequences of short-term unemployment as opposed to long-term unemployment.

Even in normal times, many people enter unemployment every month.  While losing your job can always be a shock, as long as those jobless spells are short-lived, the consequences are limited.  But as the duration of jobless spells grow longer, the effects on household finances, mental health and even jobseekers’ physical health worsen.  People can lose confidence, self-esteem, and hope, and relationships can fall apart.  Importantly, a person’s chance of finding a job in the coming month falls the longer they have been out of work.  This has implications at the policy level – for a given level of unemployment, it is better to have that pool rotating than to have a core of long term unemployed accumulate.  Once there is a substantial core of long-term unemployed, policy measures to reduce unemployment become less effective and the harder it becomes for government to wind back unemployment and for the economy to rebound.

From this perspective, the government’s ‘go early and go hard’ JobKeeper strategy makes good sense.  Keeping people connected to employment opportunities is crucial and, in previous downturns, well-targeted wage subsidy programs have tended to be one of the more effective forms of assistance for the long-term unemployed.

The youth unemployment rate is estimated to have leapt to an effective rate of around 20% in April, hit hard by the job losses in hospitality and retail.  On the positive side, a high proportion of youth are in education and training and others have many options for retraining and changing career paths.  While the headline unemployment rate for older workers is lower, it is this group that is often the most severely affected by job loss and whose re-employment prospects fall off sharply with time spent in unemployment.