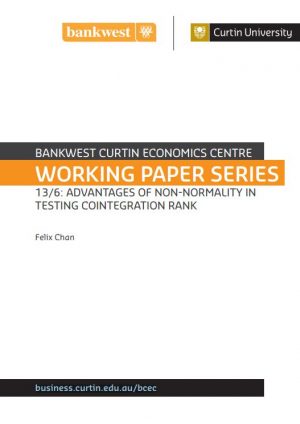 Since the seminal work of Engle and Granger (1987) and Johansen (1988), testing for cointegration has become standard practice in analysing economic and financial time series data. Many of the techniques in cointegration analysis require the assumption of normality, which may not always hold. Although there is evidence that these techniques are robust to non-normality, most existing techniques do not seek additional information from non-normality. This is important in at least two cases. Firstly, the number of observations is typically small for macroeconomic time series data, the fact that the underlying distribution may not be normal provides important information that can potentially be useful in testing for cointegrating relationships. Secondly, high frequency financial time series data often shows evidence of non-normal random variables with time-varying second moments and it is unclear how these characteristics affect the standard test of cointegration, such as Johansen’s trace and max tests. This paper proposes a new framework derived from Independent Component Analysis (ICA) to test for cointegration. The framework explicitly exploits processes with non-normal distributions and their independence. Monte Carlo simulation shows that the new test is comparable to the Johansen’s trace and max tests when the number of observations is large and has a slight advantage over Johansen’s tests if the number of observations is limited. Moreover, the computational requirement for this method is relatively mild, which makes this method practical for empirical research.