Home > News > After the Siren launches with community celebration

After the Siren launches with community celebration

BCEC launches After the Siren: The community benefits of Indigenous participation in Australian Rules Football 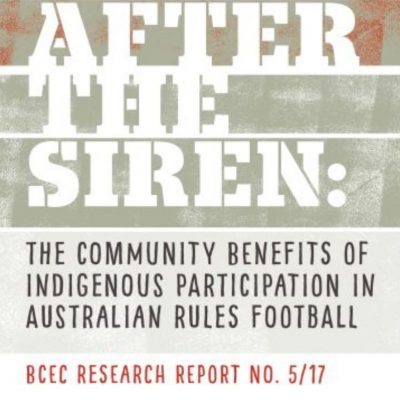 What is clear from the report findings is that AFL is an inclusive sport that offers wide accessibility irrespective of socio-economic background. The report also highlights the broader role AFL can play in a community, by being the conduit through which community programs targeted at health and safety can be delivered, and the means through which communities can be brought together.

See highlights from the launch event

At the heart of this community gathering was a very moving Welcome to Country delivered by Associate Professor Forrest, Elder-in-Residence at Curtin University.

“I am of this land and place. This is my mother’s maternal country. My mother can trace her maternal line back to a Noongar woman who lived in the early days of the Swan River colony. I, as an Aboriginal Australian, as a first Australian, embrace and welcome the cultural diversity of our nation,” Associate Professor Forrest said.

“WAFC launched its own reconciliation action plan to deepen the participation and involvement of Aboriginal and Torres Strait Island players in AFL. To now be able to talk factually about the benefits and share this important research will only enhance our resolve to continue our work in this important area,” Mr Taylor said.

Launching the report, Associate Professor Michael Dockery highlighted the extensive literature showing that participation in sport has health benefits and went on to explain the significance of these positive effects on the Australian Indigenous population.

“Without dwelling on the deficits, there are a number of issues to address with Indigenous Australians, including lower life expectancy, high suicide rates and if you’re a young Indigenous Australian, you’re 24 times more likely to be incarcerated. Sports provide an arena, and a rare level playing field where Indigenous people can compete on an even footing with non-Indigenous players.

“We know remote communities love their football, they live and breathe it! Our findings show that two thirds of young men aged between 15 and 29 living in remote areas of Australia played AFL.

“I would like to think this report provides good evidence for the potential rate of return if all agencies worked together towards a coordinated approach. This is not just the role of the AFL, a recent parliamentary report said you cannot expect sport agencies to achieve non-sport outcomes. It has to be done in conjunction with the health, education and justice systems.”

Dr Sean Gorman spoke about the important role of football in our society and the redemptive power of the sport.

“We know the issues faced by Aboriginal people. We know they come from disadvantaged backgrounds and have a history of repression. The trials and tribulations that Aboriginal people have faced, AFL becomes the healer. Australian Indigenous people are able to reclaim their place in the world through AFL. It provides us with hope and with a way forward. It becomes the healer,” Dr Gorman said.

Ms Kirby Bentley, Vice-Captain of the Fremantle Dockers Women’s Team shared her story of how she found her passion for footy when her mum’s sister was murdered during a domestic violence incident.

“We all experience different things in our lives whether it’s domestic violence, drugs, alcohol or depression. Whatever the case may be, we all have our challenges. AFL provides me with that platform to share my story and keep me on the right path,” Ms Bentley said.

“I am incredibly proud of the Kirby Bentley Cup, established by the WAFC, which provides a platform for girls to be the best they can be and to further their sporting career through AFL.”

Mr Chance Bateman, former Premiership player for Hawthorn Football Club and Employment Mentor at Wirrpanda Foundation thanked BCEC for the invitation to speak at the launch and said it was a great opportunity to reflect on his own journey and look at how much footy has impacted on his life and shaped who he is today.

Mr Bateman highlighted his socio-economic background and financial situation growing up. Coming from humble beginnings, like a lot of small town kids, they had very little but they had a lot of love from their families.

“We didn’t have much. We couldn’t go to camp that needed to be paid for or we couldn’t afford a uniform. But I could run, I could jump and I was relatively strong. I was quite a shy and reserved kid and getting recognition from coaches and positive reinforcement from my team mates because of the way I performed on the field did wonders for my self-esteem,” Mr Bateman said.

“My footy and my ability to play gave me so much. My confidence made me want to be the best player I could be. I’ve got no doubt this is where my self-drive, focus and motivation comes from. Football participation promotes self-control, self-esteem positive feelings and positive social interaction.”

Mr Duncan Ord OAM, Director General of the Department of Local Government, Sport and Cultural Industries spoke about inclusion, and talked about how football has been so transformative for Indigenous Australians.

“There is a very powerful narrative unfolding within this report; stories of successful Aboriginal footballers, both male and now female. These stories build on the assets, strengths and the culture of Australian Indigenous people,” Mr Ord said.

“The report supports the evidence and the work being done within the Department.”

Bankwest Head of Community Engagement, Mr Craig Spencer, delivered the vote of thanks and congratulated the authors on producing another compelling report. He also thanked the panellists for sharing their journey and valuable insights, and Ms Narelda Jacobs for facilitating the event proceedings.

Craig went on to commend Mr Ord for highlighting the fact that “evidence is the new black,” and that knowledge is power.

“At the most recent BCEC report launch on WA’s energy industry, Minister Wyatt quoted how important it was to have economic and social research about WA and produced in WA, and how useful the powerful research from the Bankwest Curtin Economics Centre served while he was in opposition.”

“Yes, we are in a challenging fiscal environment and we need to make decisions and policies based on evidence. This report has got that in spades.”

Associate Professor Dockery also authored an article in The Conversation, detailing the report findings. You can also view media coverage of the report on National Indigenous Times, WA Today and The Examiner.