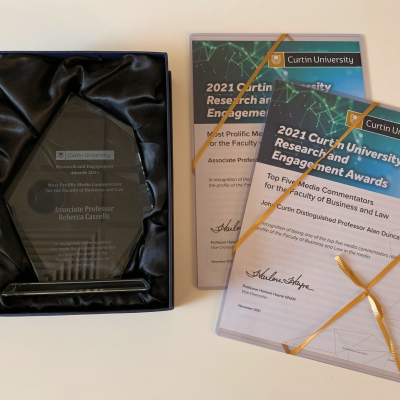 Alan was recognised as a Top Five Media Commentator for the Faculty of Business and Law for 2021 for his media engagement throughout the year.

Both Alan and Rebecca have appeared repeatedly on radio, television, print and online in 2021 to provide expert economic commentary. Their analysis BCEC Policy Brief 2021: Extending the Low and Middle Income Tax Offset Beyond 2020-21 gained significant national media attention in April this year. Following its release, the Federal government announced the extension of the LMITO through to the end of the 2021-2022 financial year, positively impacting almost 10 million Australians on low and middle incomes by retaining their current take home pay.

Bankwest Curtin Economics Centre researchers have been recognised every year since 2014 in Curtin University’s annual research and engagement awards.

Congratulations to Rebecca and Alan for their well-deserved recognition.