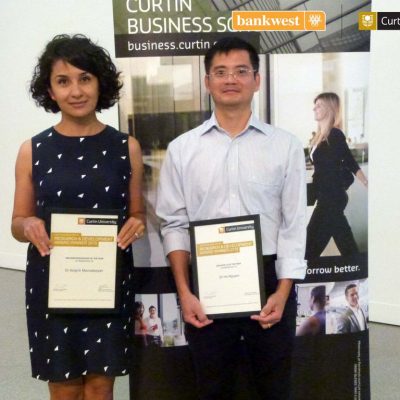 BCEC Senior Research Fellow Dr Astghik Mavisakalyan has been awarded the CBS New Researcher of the Year 2015 prize, in recognition of an exceptional year of research achievements incorporating five high quality journal publications, contributions to BCEC reports and major consortia including the award-winning ‘Keep Them Safe’ evaluation, the award of international funding awards, a prestigious ARC Fellowship Mentoring and involvement in numerous panels both within Curtin and nationally.

BCEC Research Fellow Dr Ha Nguyen has been awarded the CBS Article of the Year 2015 prize for his article “Does school type affect cognitive and non-cognitive development in children? Evidence from Australian primary schools” published in the A-ranked Labour Economics. The article has received both media and academic recognition and emphasises good collaborative links with other universities.