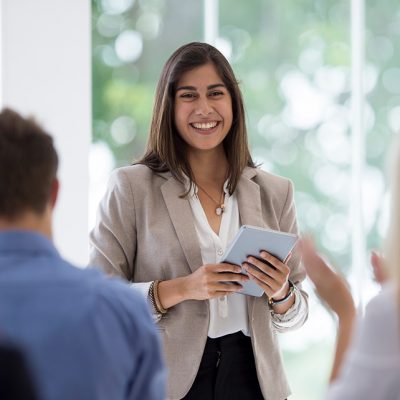 The Centre has had major recent achievements with its research in gender equity and tax modelling shaping government and public enterprise policies.

BCEC has partnered with the Workplace Gender Equality Agency for the past six years, producing the Gender Equity Insights report series that confront a variety of gender equity issues in the workplace that surface through reporting data from WGEA.

Our report, Gender Equity Insights 2020: Delivering the business outcomes, showed a convincing causal relationship between an increase in the number of women in key decision-making positions and subsequent improvements in company performance.

ANZ and BHP are among the first 10 signatories to the 40:40 Vision this year, alongside BlueScope, Domino’s, IGO, Ramsay Health Care, SkyCity, South32, Tabcorp and Webjet.

The current collective market capitalisation of signatory companies to the initiative is almost $300 billion and companies have publically committed to setting short and medium-term targets.

Their modelling highlighted that almost 3.4 million Australians – those on incomes between $48,000 and $90,000 – would lose up to $1,080 through the withdrawal of the LMITO, with another 7 million Australians having less take home pay after taxes and that women would be disproportionately impacted.

The outcome of the BCEC modelling was the extension of the LMITO through to the end of the 2021-2022 financial year, positively impacting almost 10 million Australians on low and middle incomes by retaining their current take home pay.

The Bankwest Curtin Economics Centre is pleased to be delivering on its mission to deliver independent and accessible research that enhances our understanding of key economic and social issues for Western Australia and the nation.