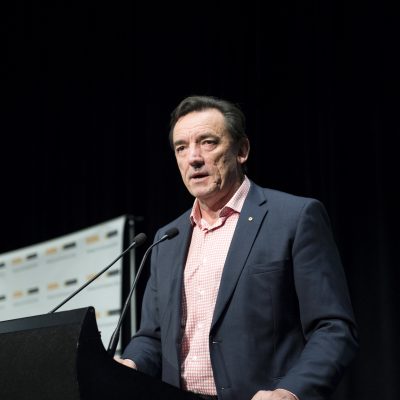 The book brings together a wealth of data, analysis and commentary on the state of Perth’s infill housing sector, a sector vital in delivering a significant proportion of the housing required to meet future population growth.

In his opening remarks, The Hon. Peter Tinley AM MLA, Minister for Housing; Veterans Issues and Youth, said the book and contributions made by all involved offer thoughtful perspectives and provide a forward-thinking approach to the way we can address and deliver infill development.

“The book provides insights that are fundamentally important to the way we unlock the potential and opportunities that are necessary to increase rates of infill development, in order to meet the government’s aspirational target of 47 per cent infill. There have been various conversations within government on how we might mandate that target and how we might drive it in legislative terms. It’s a very difficult prospect,” Minister Tinley said.

See highlights from our launch event:

In launching the book, Editor Associate Professor Steven Rowley, from the School of Economics and Finance at Curtin University, discussed key findings including the roles of planning systems, infrastructure investments, community engagement and design-led innovations in promoting infill development, as well as the opportunities that infill housing presents for enhancing city sustainability.

“Over the past few years, we’ve seen an increase in the rate of infill development, up six per cent between 2013 and 2015, but this varies dramatically across Perth. Infill development currently stands at 34 per cent, which is well below the State Government’s target of 47 per cent,” Associate Professor Rowley said.

“Between 2011 and 2016, there was a slight reduction in the proportion of new housing made up of separate dwellings, indicating an increase in the number of medium and high density developments such as units and apartments.

“We expect this trend to continue, as more households seek affordable opportunities in central locations – close to quality amenities including transport links. However, this requires a change from the traditional Perth model of greenfield development to an increase in medium and higher density housing options.”

“Development opportunities arising from Metronet have the potential to deliver precinct-type developments and a range of infill housing options if planned correctly,” Associate Professor Rowley said.

“Perth has already demonstrated how it leads the way in many aspects of sustainability and this book provides a number of examples to support this claim.”

Mr Gavin Hegney, Director of Gavin Hegney Property, said the book explores unique aspects of the Perth housing market and the impact of the State’s boom and bust market on housing.

“Western Australia has built more individual housing per capita than any other state and therein lies the opportunity and the challenge. The book’s chapter on Housing Demand, Diversity and Affordability are three areas of interest to me as it outlines the ambitious targets set within strategic planning documents including Directions 2031 and Beyond,” Mr Hegney said.

“The book discusses the current targets, which are down at almost 20 per cent, and you can see we’re going to have to play catch up at some stage to meet that overall target average. It talks about the State Planning Strategy 2050 which recognises more diverse housing delivery and the importance of location – on transport hubs and transport corridors.”

Ms Marion Fulker, Chief Executive Officer of Committee for Perth said the book allows us to reflect on what the community value most in housing developments, and to ensure they are engaged during the planning process.

“It’s about adding quality of life, if people are going to be trading off one thing against the other. We need to consider what the community feel is being forced upon them. Households seek affordable opportunities in central locations – close to quality amenities including transport links,” Ms Fulker said.

“Flexible planning regulations are needed to accommodate innovative housing solutions and we should not squander the opportunity for Metronet to connect our suburbs, reduce road congestion and meet Perth’s future planning needs, and it’s very much about taking that precinct approach.”

Ms Gail McGowan, Director General for the Department of Planning, Lands and Heritage said we often get distracted by debates over density that seem to always imply that density and choice is a bad thing.

“I think, as the book examines, we need to look at the whole landscape through a much broader lens. And as the book outlines, we are in a state of transition and we have to keep the spotlight firmly on how we want our city to grow and develop. We must be mindful of all the factors that help create a sustainable vibrant sense of place that makes a true community,” Ms McGowan said.

Curtin University Vice-Chancellor, Professor Deborah Terry AO said how we respond to the economic and social challenges of our time – as a nation, as a state, and importantly as a community – is increasingly driving debate across all levels of government and all sectors.

“In this environment, the Bankwest Curtin Economics Centre has a critical role to play as an authoritative, independent and trusted source that can deliver the evidence-base needed to inform many of these debates, and ultimately good public policy for the people of Western Australia.”

“WA Treasurer The Hon. Ben Wyatt MLA, a frequent attendee at BCEC events, has commented ‘The BCEC is WA’s signature think tank on public policy – and BCEC’s research has been of great use in informing public policy debate’,” Professor Terry said.

In closing the event, Mr Troy Leber, Head of Property Finance at Bankwest said this book, the BCEC’s first, is yet another valuable and important addition to the suite of forensic research reports released by the BCEC.

“The book looks at not only the current situation here in Perth, but also looks to the future, providing a roadmap for developers and planners who’ll have to contend with housing Perth’s growing population,” Mr Leber said.

“Innovation in design and technology are going to be critical for developing sustainable and innovative housing.”

Coverage of the report can be read on The West Australian, Australian Financial Review, The Australian, ABC and WA Today, or hear Associate Professor Rowley discussing the report findings with 6PR’s Gareth Parker.