Home > News > Astghik Mavisakalyan on her journey from Armenia to Perth

Astghik Mavisakalyan on her journey from Armenia to Perth 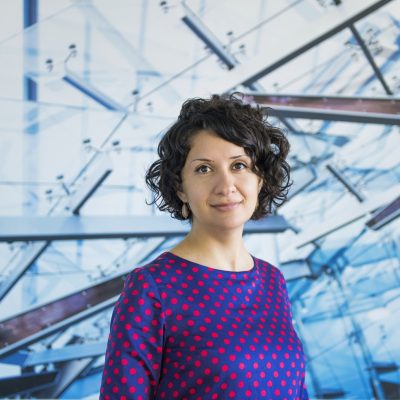 Recently we sat down with Astghik for a Q&A to talk about her journey from Armenia to Perth, and how her upbringing has in many ways prepared her for living through COVID-19.

What’s it like working at BCEC while social distancing?

For me, the transition to the online home-based mode of working has been quite seamless, largely because we are a well-developed, highly flexible and spontaneous team. We get together over trivia twice a week and also catch up in smaller groups during the week. In general, I may have had more social interactions, albeit through technology, over the past months than I would have had in more normal times. There has been a lot of effort to counteract the effects of physical distancing and this resulted in more interactions. I do nevertheless miss chatting over lunch, our seminars and public events.

You grew up in Armenia. Tell us a little about that.

I am from Armenia’s capital, Yerevan, one of the world’s oldest cities, dating back to the  8th century BC. What I love the most about Armenia is the warm and collectivist culture – one of my biggest cultural shocks post-emigration was the realisation of how highly individualistic and seemingly lonely most other places in the world are in comparison.

I grew up in exciting, but challenging times – when I was 12 years old, the Soviet Union, of which Armenia was a part, collapsed and the process of transition was rough. I spent a lot of time as a child in the late eighties taking part in large-scale public demonstrations with my parents, who were very active politically, over a period of couple of years that led to Armenia’s independence from the Soviet Union shortly before it collapsed in 1991. This period and the subsequent years also coincided with a devastating earthquake, Armenia’s war with the neighbouring Azerbaijan (still unresolved), blockade and the almost complete disintegration of its economy.  For around 4 years in the first half of the 90s, the whole country lived in an energy crisis: we had no heating or hot water, we lived almost entirely in darkness, food was scarce and a lot of places, including schools, were shut some of the time. When the war and the energy crisis ended, the situation started to improve in some ways in the course of the second half of the 90s, but signs of retreat from the path of democratization had started to emerge. At the same time, scholarship opportunities to study abroad were increasingly becoming available for people from transition countries and I was awarded one such scholarship, leaving the country in 2003.

You mentioned that your upbringing in some way has prepared you for living through COVID19. Could you expand on that?

As many from developing and transition countries, I have lived through times that were out of the ordinary. That gives me some perspective on things, and also the ability to see and focus on the good side of things as these are often those that stay with you over time. Crises like COVID19 give us the opportunity to deeply appreciate simple things, like a handshake, that we’d otherwise take for granted. They also give the opportunity to imagine more vividly alternative states of the world, ones where we’d drive much less, consume less, spend more time in nature, and be potentially happier. The crises in Armenia brought people much more together with everyone helping each other out and caring for each other. In the ‘dark and cold years’, as we call them, I’d struggle to recall a day where we wouldn’t spend the evening with neighbours or friends, sharing food or a source of heat. Sadly, this could not happen in our current crisis that requires physical distancing.

What inspired you to become an economist?

At the time I was to enter the university at the age of 16, I had experienced disruptions to my school education, and had spent a lot of my time doing logic puzzles, solving maths problems and reading (I know this makes me sound very nerdy, but actually, a lot of young people in Armenia were doing this at the time because there wasn’t much else to do). I had no idea what economics was – but in those times, it was a popular choice for young people, and it also held the promise to accommodate my passion for social issues and my maths skills. Economics was taught somewhat differently in those times in transition countries, and I was initially disappointed with my choice. I carried on with the degree nevertheless, while spending most of my five years at the university working as a journalist, which I loved. Post-graduation, I increasingly started thinking about studying abroad, and eventually left for Japan to do a masters degree with a World Bank scholarship. This is when my deep engagement with economics started, and it was hard, both because a masters degree assumed a lot of advanced knowledge in modern economics, which I lacked in some cases, and because my English was still poor at the time. In my second year, I started really enjoying econometrics, inspired by my amazing lecturer Daiji Kawaguchi, and developed a passion for research. By the time I had finished my degree in Japan and had secured another scholarship for PhD studies at the University of Sydney, I was super excited about doing research in economics.

Your research falls in cultural economics, political economy, development economics, labour economics, and gender and migration. Is there a uniting theme?

I really care about issues of social injustice, inequality, disadvantage and think a lot about why some people and societies are able to find ways out of these states, while others fail. In this context, I am interested in how culture, institutions and historical events either contribute to or hamper the evolution of fair and flourishing societies. For example,  I have worked on how having a certain race, gender, migrant status or physical appearance can be a disadvantage in the labour market. Similarly, my interest in why some individuals and countries opt for more redistribution, more climate change action, compared to others is driven by my deeper concerns about social injustice, inequality and disadvantage.

Tell us about something interesting you are working on

I am particularly passionate about three areas of my current research. First, a lot of my work over the past years has been concerned about the way the language we speak might shape our behaviour, leading to societal-level differences in socio-economic outcomes. In a recent paper, for example, my collaborators and I show that individual differences in religiosity can be explained by whether or not your language has a future tense. Second, I am interested in the sources of differences in climate change action across individuals and societies. Another recent paper, for example, highlights the role of female leadership in progressing with climate change mitigation initiatives across countries. Third, I am interested in the consequences of political conflicts on the lives of individuals, with ongoing collaborative work focusing on child health outcomes in a large sample of developing countries.

What support have you had to enable success in your career?

Having gone through disruptions in my formal school education, I might not have been able to pursue further studies at all if I wasn’t fortunate to be born in a family with very caring and educated parents. Both were engineers and tried to make sure that I was motivated, in large part by being good role models, and that I had opportunities to learn through having a lot of books and engaging in productive activities, such as doing maths. At this stage, I balance my work with caring responsibilities for my two young children and this would be impossible without having a husband – another academic – who shares equally the childcare and domestic workload with me. Not all women in academia who choose to have families are as fortunate as me in that sense, and this is likely a big barrier to their progression. Clas is also one of my most important advisors, and provides comments on almost every paper I write in spite of not being an economist (he is a theoretical philosopher). I have also been very fortunate with having great supervisors – starting with my PhD thesis supervisor, Kunal Sengupta, my postdoc supervisor, Chris Ryan, to my current supervisor at BCEC, Alan Duncan – all of whom have significantly shaped my thinking, my skills and research interests, and who have believed in me and extended a tremendous amount of support to my career.

What key skills do you need to do your job?

I am naturally very curious and this is key in the way I do things. I always have lots of different research questions in my head, not all of these related to the immediate research projects I work on but broadly to social problems I care about deeply. Economics is a very competitive discipline and it is not easy to come up with new ideas and write good papers. I rely a lot on my imagination and look for patterns in places where they may not seem to exist. I’m also very collaboratively inclined, and I think collaborations are extremely important in both producing good research but also in enjoying the work we do more by sharing the joy as well as the load. This is very important at BCEC and I feel very fortunate to be part of a very collaborative, well-functioning and happy team. I am highly organised and structured – I have to be as a working mother of two young children – and this helps with being productive in some ways. But ultimately, I love my job and feel a strong sense of dedication to doing it well.

If you weren’t an economist, what profession would you like to go into?

I’d love to be a food critic, and work for something like the Michelin Guide – that seems like an absolute dream career, at least the way I imagine it to be. More realistically, I take a lot of interest in disciplines adjacent to economics, such as political science and demography, and could see myself greatly enjoying working in these areas.

Lastly what is the first thing you are going to do once COVID19 restrictions are lifted?

As an immediate step, I plan to go for yum cha in a favourite restaurant in Northbridge. Next, I’ll book our overseas trips to visit families and friends in Armenia and Germany, where Clas comes from.