— Infill housing development is on the rise, but still below target —
— Numerous examples of good design and sustainability practice exist across Perth —

Addressing the ‘Not In My Back Yard’ concerns of neighbours early in the development process and flexible planning regulations are key to delivering innovative housing solutions for the future, according to a new book released by the Bankwest Curtin Economics Centre (BCEC) today.

Urban infill developments are vital in delivering a significant proportion of housing required to meet future population growth in Greater Perth. These developments are typically characterised by greater housing diversity than traditional ‘greenfield’ developments on the urban fringe.

Editor Associate Professor Steven Rowley, from the School of Economics and Finance at Curtin University, said the book reveals the need for negative community attitudes to be tackled early in the development approval process.

“Residents who live near proposed infill developments tend to be worried about the impact on local traffic, parking and their own property values. These concerns can often be overcome by early and open discussions between the community and developers,” Associate Professor Rowley said.

The book also highlights the shift in the composition of Perth’s housing supply, partly in response to changing demand, but acknowledges more needs to be done to move away from the prevalent traditional, separate dwellings.

“Over the past few years, we’ve seen an increase in the rate of infill development, up six per cent between 2013 and 2015, but this varies dramatically across Perth. Infill development currently stands at 34 per cent, which is well below the State Government’s target of 47 per cent,” Associate Professor Rowley said.

“Between 2011 and 2016, there was a slight reduction in the proportion of new housing made up of separate dwellings, indicating an increase in the number of medium and high density developments such as units and apartments.

“We expect this trend to continue, as more households seek affordable opportunities in central locations – close to quality amenities including transport links. However, this requires a change from the traditional Perth model of greenfield development to an increase in medium and higher density housing options.

“State and local governments need to deliver the conditions necessary to attract private investment in infill development. Development opportunities arising from Metronet have the potential to deliver precinct-type developments and a range of infill housing options if planned correctly.”

“Developments that rely heavily on household car use have a far greater environmental impact than those that cater for walking, cycling or public transport,” Professor Ong ViforJ said.

“It is essential that new housing developments work with existing and future public transport hubs, encouraging walking and cycling, and improving liveability and sustainability outcomes.”

Associate Professor Rowley added: “Sustainability features within dwellings themselves such as solar power and water efficiency measures will eventually become expected by consumers and will reduce running costs and positively impact on housing affordability.

“Perth has already demonstrated how it leads the way in many aspects of sustainability and this book provides a number of examples to support this claim.”

Key findings from the book include: 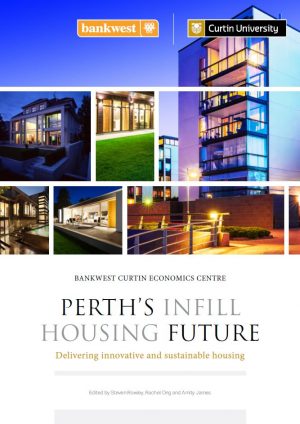