Sharing the Boom in Western Australia…but how equally?

Western Australians have seen clear benefits from the mining boom – but not all have benefitted equally, with the State’s lowest income households falling behind the rest of the WA population.

The Bankwest Curtin Economics Centre (BCEC) at Curtin University today released a major report on Sharing the Boom: the distribution of income and wealth in WA, which analyses the impact the resource boom has had on people throughout the State.

Professor Alan Duncan, Director of the Bankwest Curtin Economics Centre, explained the benefits of the boom had improved the circumstances of many households in WA, but that there had been a rise in both income and wealth inequality over the period.

“The gap between the richest and poorest households in WA rose consistently since the acceleration of the WA boom in 2003-04 to its peak in 2009-10, and at a greater rate than for the rest of Australia,” Professor Duncan said.

“This report looks at inequality from a relative standpoint. There have been real gains among the lowest income households, but the report shows they haven’t been able to share in the benefits of the boom to the same degree as higher earners, financially at least,” Professor Duncan said.

The situation for the lowest income households hasn’t been helped by the fact the overall prices in WA – as measured by CPI – ran consistently ahead of those for the rest of Australia for much of the heart of the resources boom, especially for those in regional WA.

WA households are among the wealthiest in the country, and Perth ranks third across the nation for mean household net worth, averaging just over $800,000 per household. The average net worth for regional areas in WA reached $715,000 in 2011-12 – ranking first among all state and territory regions in Australia.

“Household net wealth in WA has increased by more than 70 per cent in real terms since 2003, adding at least $268 billion to the State’s total wealth stock,” Professor Duncan said.

The wealthiest 20 per cent of households in WA own at least 62 per cent of the State’s total household net wealth assets, with the top 40 per cent holding 83 per cent.

“Most of these gains are concentrated on the wealthiest households in WA, however, with 65 per cent of the extra net wealth generated over the course of the boom accruing to the top wealth quintile,” Professor Duncan added.

“This has led to a marginal rise in wealth inequality in the State.”

The report also showed that high income households in WA were twice as likely to be headed by a ‘tradie’ as those in the rest of Australia.

“One fifth of the highest income households in WA in 2011-12 are headed by a person that holds a trade certification as their highest level of education, compared with only 16 per cent in the rest of Australia,” Professor Duncan said.

“This reflects the commonly held belief that ‘tradies’ are among those who have benefited from the boom.”

Other key findings in the Sharing the Boom report include:

WA residents are earning more, but there are gaps across regions

A dollar doesn’t go as far in the Pilbara, Kimberley and the Gascoyne as in Perth

But even with the extra money, WA residents don’t all own homes

Professor Duncan explained that overall, the report showed WA had stayed strong during the course of an economic downturn that weakened most of the world’s economies.

“The boom has benefitted the majority of WA households, with rising employment opportunities and substantial increases in real incomes and household net wealth,” Professor Duncan said.

“But income growth across the boom period has created a greater gap between high and low income households, both in terms of income and wealth.

“Low income families in WA have failed to share the benefits of the boom at the same rate as higher income households, which emphasises the need to support those people on low income who may not benefit from the same standard of living increases experienced by the rest of the population.” 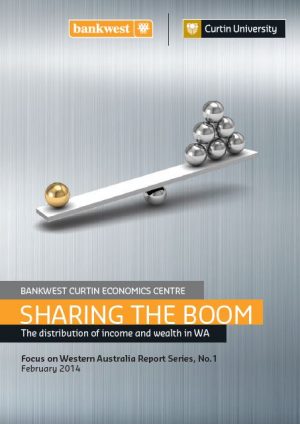 Sharing the Boom Rebecca Cassells, Alan Duncan Along with its relaxed lifestyle and beautiful beaches, Western Australia is arguably most recognised for the riches to be found under its red earth and clear blue oceans. International demand for iron ore, and the strength of China as a... Read article Publication28 February 2014Focus on WA Read More