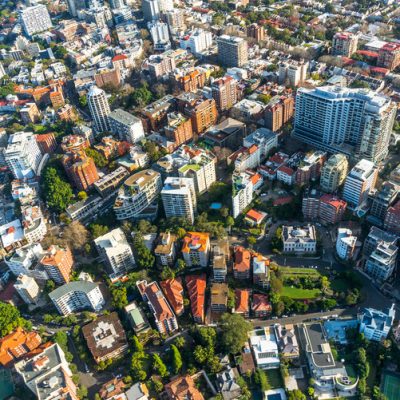 Whether house prices have been inflated by limited supply, or because of transfers to investors and homeowners, government policy is now trapped in a vicious cycle. The wealth accumulated in our houses has become a central part of the retirement system, and the government itself can’t afford for prices to fall.

Generous tax subsidies and asset test concessions on the family home have incentivised the accumulation of wealth in property and fuelled demand pressures in the housing market for decades.

Government assistance to home buyers and owners is provided in the form of the First Home Owners Grants, stamp duty concessions, and the family home’s exemption from capital gains tax, land tax, as well as the pension and other assets tests. These subsidies and concessions combine to make wealth accumulation in the family home more attractive than other assets.

The family home has become a cornerstone of the Australian retirement system. Sustained house price increases have allowed government income support to be set at historically low levels in Australia compared to other countries with lower home ownerhsip rates such as Sweden and the Netherlands. This is based on the assumption that the low-income elderly will be housing asset-rich, and can therefore can get by on smaller pensions.

Indeed, in an era of ageing populations, governments have been encouraging older Australians to tap into their store of housing wealth to fund their own retirement and ease intergenerational fiscal tensions. For instance, the Productivity Commission’s aged care equity release scheme recommends elderly home owners draw down against their housing equity to meet aged care costs.

Of course, this only works if house prices continue to rise.

If house prices fall, the cycle gets broken and the family home may no longer be an adequate base for supporting the retirement needs of the wider population. In the event of a long-term decline in house prices, individuals would require greater income support from governments as their personal asset base weakens. This would in turn perpetuate a rise in government social security expenditure.

Over the long term

But even if house prices weren’t to decline, there is a paradox at play in this system. In order to maintain a healthy housing asset base for retirees, house prices must remain high. So the policy-price cycle is aimed at sustaining home ownership as a key pillar of the welfare system. However, it has also resulted in housing wealth becoming increasingly concentrated in the hands of smaller subgroups. Notably, housing equity is getting concentrated in the hands of older generations. 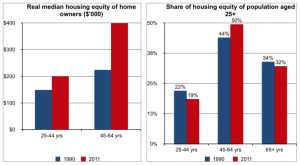 Author’s own calculations from the Australian Bureau of Statistics Surveys of Income and Housing. Author provided

As these charts show, the intergenerational housing wealth gap has widened in the last two decades. In 2011, the median housing equity of home owners aged 45-64 years was nearly double the value held by the 25-44 year olds. The share of the population’s housing equity held by those aged 45-64 years has widened between 1990 and 2011 at the expense of those aged 25-44 years.

This means the system could potentially unravel in the long term. If large numbers of young people continue to face price barriers to home ownership, the home ownership pillar within the welfare system will be weakened as the future population of home owners shrinks.

In the short-term a significant group of millennials will miss out on the benefits of home ownership. But in the long term, unless governments address some fundamental structural problems currently entrenched within our tax-transfer system, there is a significant weakness in our social welfare system built on housing.