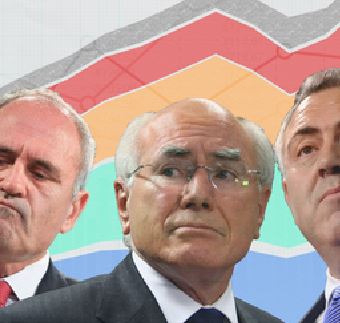 As we move closer to Treasurer Scott Morrison’s third budget, what we do know is this – Australia has a revenue problem. A more global and digital economy; an ageing population with fewer taxpayers and sluggish wage growth make future predictions of revenue even more precarious. There’s never been a better time for tax reform.

But as governments have tried to reform (and stumbled) over the years the burden has shifted to individual taxpayers and the latest budget is likely to be no different.

We looked at revenue data over the last 20 years drawing from budget papers, government finance statistics and the Australian Tax Office. To compare revenue over time, we have adjusted for the effect of inflation by using real measures.

Income tax has contributed most to this growth and some is driven by rising wages and jobs growth. Between 2009-10 and 2016-17, individual income tax revenue grew by 37% – an average of 5% each year.

But bracket creep also comes into play as personal tax thresholds have not kept pace with inflation, causing average tax rates to rise among middle income earners in particular.

The relationship between Australia’s economic output and its tax revenue looks somewhat different. The tax-to-GDP ratio reached nearly 25% prior to the global financial crisis, but dropped to 20.5% in 2010-11. It recovered to around 22% by 2012 and has remained essentially flat since then.

A history of reform attempts

Successive governments have attempted to create an efficient tax system that’s fair and reliable with few distortions. Prior to the turn of the century the Howard government argued the tax system was out of date, complex and inequitable, heavily reliant on individual and company tax, and prevented Australia competing on a global level.

The Howard government’s new tax system in 2001 was an answer to this. This new tax system seemed to have all the reform solutions needed – income tax cuts for hard working Australians and at long last the introduction of a goods and services tax, along with some pretty big welfare reforms.

Everything appeared to be going quite well with the new tax system – revenue from company tax was way, way above any Treasury official’s forecast.

But fast-forward 10 years and cracks began to show, prompting a new review into the effectiveness of Australia’s tax system. The Henry Review, provided some 138 recommendations for tax reform, yet very few saw the light of day. And just five years later, another review was conducted with then Treasurer Joe Hockey at the helm, which since seems to have been not so much parked as abandoned.

The Howard reforms included a reduction in personal income tax rates. During the next ten years Australian businesses shouldered a greater share of the tax burden, with their share rising from 17.9% in 2000-01 to 27.4% in 2007-08 at the peak of the resource boom. This has since fallen to 20.6%.

The contribution of taxes on goods and services has remained fairly steady since moving from sales tax to the GST in 2001. GST revenue is consistently around 16% of all tax revenue.

The share of tax revenue from customs duties, excises and levies has been falling since 2001, from 14.5% to 9.5%. Other tax revenue has been fairly consistent over time, contributing less than 2% of total tax revenue. However, in 2012-13 this increased to around 4%, with the introduction of the short-lived carbon pricing mechanism.

The problem with predicting future revenue

Taxation revenues were consistently underestimated prior to the global financial crisis, but have fallen below expectations since its end. The tax-to-GDP ratio has been anchored close to 22% since 2012-13. This is despite eight successive federal budgets since May 2010 projecting future tax revenues in excess of 24% of GDP.

And where does the greatest divergence lie between forecast revenues and out turns?

Company tax revenues are consistently – and by some margin – the most difficult to predict. Receipts fell short of forecast estimates of around 5% of GDP, by around one percentage point over four years, since the May 2010 budget.

The government may well feel that this creates space for a company tax cut and personal income tax cuts in the upcoming budget.

Revenue from individual income tax has been projected to rise to around 12.5% of GDP over the forward estimates, in each budget, since May 2013. Revenue has risen from 9.5% of GDP in 2009 to 11.4% by 2016 before dropping marginally by 0.2 percentage points in the latest Mid-Year Economic and Fiscal Outlook (MYEFO) forecasts.

But wages have not played the leading role that they have been cast in, in every budget going back to May 2011. Since this time wage growth has been forecast at an elusive 3% mark or thereabouts, yet has fallen well short of this each year and currently stand at 2.1%.

Unless tax thresholds in the future are increased at least in line with inflation, this means that average taxes will continue to rise.

Plans for a 0.5% increase in the Medicare Levy rate from July 2019 have been shelved, which would have raised around A$8.2 billion over the next four years to support the National Disability Insurance Scheme.

Expectations have been raised for tax cuts to businesses as the government advocates for the “trickle-down” benefits to Australian households.

It’s hard to see how this will lead to anything other than a shift in the tax burden towards individual taxpayers – at least in the short term. This is unless company tax cuts are balanced with substantial, not modest, cuts to personal income taxes as well.

It seems Scott Morrison will be banking ever more on a strengthening economy to support Australia’s taxation revenues into the future.