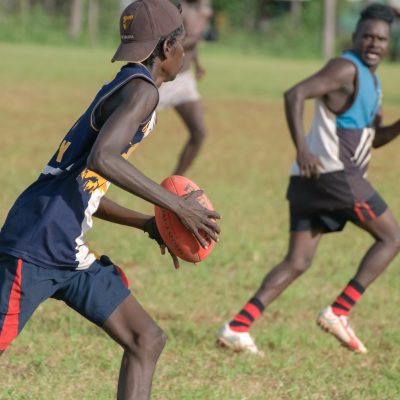 — Socio-economic status not a factor for children playing AFL —

“Of significance is both the high rates of young Indigenous men participating in AFL – reaching up to 65 per cent in remote areas across Australia – and the positive impact this has on mental health, even after controlling for a range of factors, including age, remoteness, socio-economic, labour force and marital status,” Associate Professor Dockery said.

“This finding is particularly important given the high rates of psychological stress and incarceration experienced by Indigenous men. The incarceration rate for Indigenous juveniles is 24 times that of non-Indigenous youth. AFL has an important role to play in fostering mental health and positively engaging disaffected youth.”

The report highlights the role of AFL in bringing people from all sectors of the community together, including Indigenous, refugee and migrant groups, in a safe space of mutual respect.

Associate Professor Dockery said footy was a vital part of life in remote Indigenous communities in WA and central Australia, including the Northern Territory and northern South Australia, where football carnivals and festivals bring different family groups together.

“Football offers opportunities to strengthen and pass on kinship networks, and for men and women to gather separately to talk about issues,” Associate Professor Dockery said.

“We found playing football led to better school attendance for Indigenous boys in remote areas. Football clubs and carnivals are being used to deliver road safety and anti-domestic violence programs, to conduct health checks, and vehicle safety and seat-belt checks.”

The report identifies considerable potential for deriving benefits from greater investment in structured AFL competitions and other sports programs in remote areas.

“Given the strong evidence of the benefits of AFL for Indigenous children and youth, along with their love of footy and the well-known issues facing many remote communities, we were surprised to find a number of remote centres had no junior football competition,” Associate Professor Dockery said.

“We recommend all tiers of government and local education, health, employment and justice agencies work together with the AFL to get a footy competition up and running in these communities, possibly by coordinating funding for a sports development officer.”

“While children from disadvantaged backgrounds were less likely to participate in other organised sport, this was less apparent for AFL,” Dr Gorman said.

The report also assesses the likely impact of the AFL Women’s League in promoting the sport among young women.

“Although the AFL Women’s League is still in its infancy, the WA Football Commission has reported almost a doubling in the number of female football teams in WA, since the League began,” Dr Gorman said.

“The positive social and community level impacts are likely to commence with today’s players, but the longer-term health benefits in the form of positive self-esteem and identity for Indigenous girls and women will flow over years to come.”

Participation in AFL and sport

The benefits of participation in AFL and sport 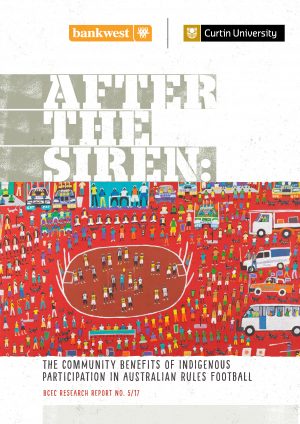 After the Siren Michael Dockery, Sean Gorman This BCEC Feature report aims to build on the narrative of Indigenous peoples’ participation in football at a grass-roots level, and the associated individual and community level outcomes. It is based on analyses of data from the 2014-2015 National Aboriginal and Torres Strait Islander... Read article Publication14 September 2017Feature Read More