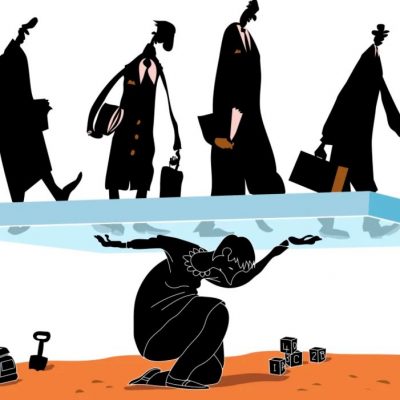 This article first appeared in the Sydney Morning Herald.

Australia is building one of the biggest low-paid workforces in its history, with serious consequences for the economy and wages.

Carers – aged care, childcare and disability care workers – have been the No.1 growth occupation in the past 10 years, with an additional 170,000 workers added between the 2006 and 2016 censuses. The majority are women.

This workforce now numbers around half-a-million workers, and has bolstered the booming healthcare sector, which has grown at double the pace of the entire labour market in the past four years alone – 20 per cent compared with 10 per cent. Yet the hourly wage rate these workers attract is often only just above the minimum wage and well below what could be considered a “living wage”. An average childcare worker can expect to earn $21 an hour and aged and disability care workers around $24 an hour. Care workers are taking home about $33,000 each year.

Caring roles – caring for children, the sick, the disabled and the elderly – have for the most part fallen to women and historically have largely been unpaid.

They have also been one of the biggest barriers to women’s economic security and access to jobs within the “formal” labour market. The National Disability Insurance Scheme, aged care and childcare public funding models have now shifted many of these roles into the “formal” labour market, with demand for these services unwavering. The Department of Jobs and Small Business has predicted that in the next five years, aged and disability care workers will grow by 40 per cent and the childcare workforce by 18 per cent.

Formalisation and expansion of these historically unpaid roles can be considered to be a relatively good thing – especially for women. The care workforce has opened up employment opportunities for many workers, particularly older women. It’s also removed barriers to employment, freeing women up to pursue other paid work opportunities. And it also means that finally some of the work that women have always done can now actually be counted. But there are plenty of problems with building such a large low-paid workforce, not least for the workers themselves.

The labour market has looked extremely healthy lately. Unemployment has fallen to a six-year low of 5.1 per cent and participation is the highest it’s ever been. But despite the tighter labour market, we have not seen the anticipated wage growth that should follow.

Lots of reasons have been offered, but we can’t ignore the likely effect that the addition of thousands of low-paid care workers is likely to have on wage growth both now and in the future. Adding tens of thousands of workers to the bottom of the earnings distribution also means that wage inequality is likely to increase over the coming years and these workers will be hard pressed to contribute to substantive consumption growth or the tax revenue base that the government is looking to secure.

Low-paid jobs can play an important role in the economy, generally offering lower-cost goods and services, but is care work really a low-value service? And should it be paid as low as it is, especially when we can see a number of companies making huge profits?

The aged care sector is a good example. Six big for-profit players are operating in the sector and three of these – Regis, Estia and Japara – are listed on the Australian Stock Exchange. The sector is forecast to earn about $1.7 billion in profits in the 2018-19 financial year, with revenue reaching $20.2 billion. It also attracts more than $18.6 billion in government funding, yet it pays only $13.2 billion in wages.

What’s more, we’ve seen an increasing mismatch between the needs of those in aged care and the skill level (and pay) of the workers who care for them.

Recent analysis by the Bankwest Curtin Economics Centre has shown that the number of people with complex health care needs in residential aged care has quadrupled in the past 10 years – from 13 per cent to 52 per cent, yet the number of staff qualified to deliver this care has failed to keep pace. In fact it’s likely that lower-paid and lower-skilled personal care workers are substituting for the work of enrolled nurses in Australia’s residential aged care homes, with personal care workers 31 per cent above the estimated workforce requirements.

This evidence suggests the aged care sector and its workforce is well and truly ready for an overhaul. The Aged Care Workforce Taskforce that will start in 2019 and the royal commission that is under way will hopefully address some of the skills issues we are seeing in this sector.

Meanwhile, childcare workers continue to advocate a pay rise but earlier this year lost a five-year wage case as unions were unable to prove comparable worth to male-dominated industries.

Labor has recently promised that if elected it will abolish this requirement and install a new Pay Equity Panel to preside over pay equity cases presented to the Fair Work Commission. This move is likely to shape some big changes.

Notwithstanding these initiatives and the increasing likelihood of a Labor government, it may well be time again for this huge workforce to collectively do what it has the numbers to do, and what Reserve Bank governor Philip Lowe has been encouraging workers do for some time now – demand a pay rise.

For policymakers, academics and everyone else, it’s a good time for us to take a leaf out of Mariana Mazzucato’s book and ask the question – who really does create value in an economy and how much is it really worth?