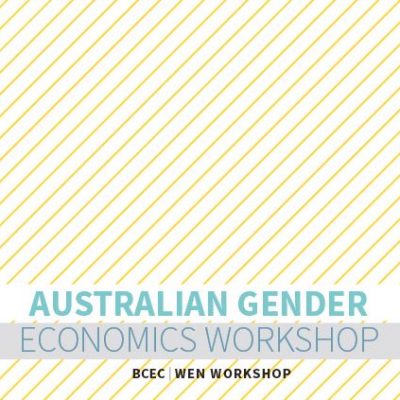 The Bankwest Curtin Economics Centre (BCEC) at Curtin University, together with the Economic Society of Australia’s Women in Economics Network (WEN)  are pleased to announce the Australian Gender Economics Workshop.

While substantial progress toward gender equity has been made over the past decades, key gaps in various life aspects relating to family, education, employment, wealth, security, voice and agency remain. There is a need for new insights to better understand the role and impact of gender on all economic and social domains, and to translate these insights into actions. The workshop aims to help fill this gap.

This workshop will provide researchers with a forum for presenting and discussing innovative research incorporating gender analysis in all areas of economics. Priority will be given to sessions that can inform policy-relevant questions.

The workshop will include a special policy session involving senior influencers from government, research, industry and not-for-profit communities. The purpose of this session is to draw research insights from the workshop together in ways that will actively shape policies to enhance the status of women across the full spectrum of economic and social outcomes.

Gender representation in economics textbooks and what it means for inclusivity in the classroom
Betsey Stevenson, Associate Professor, Michigan University

Session 1A GENDER AND HUMAN CAPITAL

Session 1B GENDER AND NON-COGNITIVE CHARACTERISTICS

Session 2B GENDER AND LEADERSHIP

Session 3A CULTURE, IDENTITY AND BEHAVIOUR

Session 3B GENDER AND SOCIAL JUSTICE

SESSION 4B EVALUATION OF POLICIES

SESSION 5A GENDER IN DEVELOPING COUNTRIES

SESSION 5B ECONOMICS OF THE HOUSEHOLD