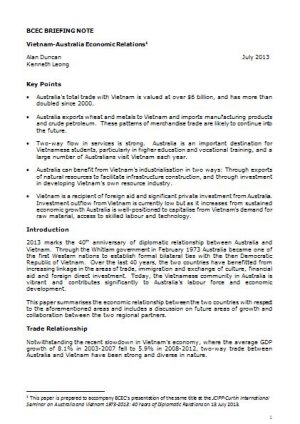 2013 marks the 40th anniversary of diplomatic relationship between Australia and Vietnam.  Through the Whitlam government in February 1973 Australia became one of the first Western nations to establish formal bilateral ties with the then Democratic Republic of Vietnam.  Over the last 40 years, the two countries have benefitted from increasing linkage in the areas of trade, immigration and exchange of culture, financial aid and foreign direct investment.  Today, the Vietnamese community in Australia is vibrant and contributes significantly to Australia’s labour force and economic development.

This paper summarises the economic relationship between the two countries with respect to the aforementioned areas and includes a discussion on future areas of growth and collaboration between the two regional partners.