Home > Publications > Trends in Poverty and Inequality in Decentralising Indonesia

Trends in Poverty and Inequality in Decentralising Indonesia 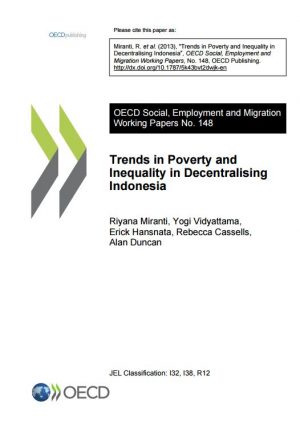 As one of the world’s largest emerging economies, Indonesia has experienced rapid economic growth and substantial reduction of poverty over the past three decades, particularly prior to the 1997-98 Asian Financial Crisis. After the crisis, Indonesia entered a new development phase that saw the fall of the Suharto government and new governance which moved highly centralised policies and powers towards a decentralised process. This research report analyses economic and social patterns and trends of poverty and inequality in Indonesia with a particular focus on the decentralisation period from 2001 to 2010.The Indonesian political and economic environment has changed significantly during this period and this had implications for individual wellbeing, regional economic prosperity and national economic growth. The report finds that in general, absolute poverty rates have continued to decline during the decentralisation period although the reduction has not been as strong as it was prior to the Asian economic crisis. In contrast, consumption inequality has increased during the same period. New estimates of growth and inequality elasticity of poverty suggest that this rising inequality has been offsetting the positive benefits of consumption growth on poverty.