Home > Publications > happy workers: How satisfied are Australians at work?

happy workers: How satisfied are Australians at work? 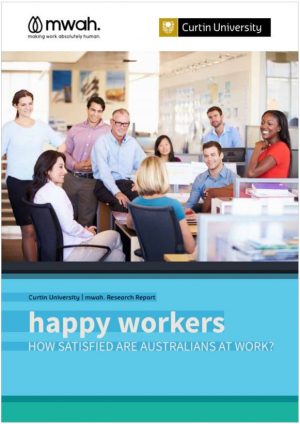 In 2017, around 12 million Australians will work an estimated total of 20 billion hours in paid employment. An average Australian man can expect to spend half of their waking lives at a paying job and an average Australian woman about 38 per cent. Given the time and commitment we spend at work each day and year, shouldn’t we try and make it as human as possible?

A happy workplace where people feel valued can increase productivity and reduce the amount of human resources dedicated to resolve workplace grievances. Greater satisfaction and happiness at work has also been shown to have a number of positive relationships with business performance. Organisations with happy workers tend to have lower levels of absenteeism and staff turnover (Kristensen and Westergard 2004). Happier workers and workplaces also deliver higher levels of productivity and are often more innovative (Oswald et al. 2015, Iaffaldano and Muchinsky 1985).

Given the amount of time spent at work, the standard of living and sense of identity and belonging that a job can afford us, happiness at work is also closely linked to overall life satisfaction, and more so for men than women (Dockery et al. 2003). Those that find it difficult in the labour market, especially the unemployed, are more likely to have lower levels of life satisfaction than those that are gainfully employed.

In our workplaces we are also often able to access basic needs that are intrinsic to our overall wellbeing and level of satisfaction or happiness. These needs include a sense of competency, a sense of autonomy and a sense of relatedness (Deci and Ryan 2010). If all three are being met we are likely to feel far better about ourselves overall and have increased motivation and engagement in our daily tasks – including work.

The importance of creating workplaces that are ‘happy’ workplaces that can deliver so many benefits to individuals and the broader community is clear. In this report we look at the relationship between elements of job satisfaction and characteristics of individuals and their work using the latest data from the Household Income and Labour Dynamics in Australia (HILDA) survey. As satisfaction and happiness are often interchangeable terms across economic and psychology studies, throughout this report we use these terms in this same way.

We look to find out who the happiest and unhappiest workers are in Australia and what contributes to greater satisfaction in the workplace. Is it the way we work – flexibility, hours, our occupation or the job itself? Is it our pay or job security? Does the size of the company we work for matter, or is it more about whether we own it or whether we work for someone else? And what about where we live and work – does that make a difference?