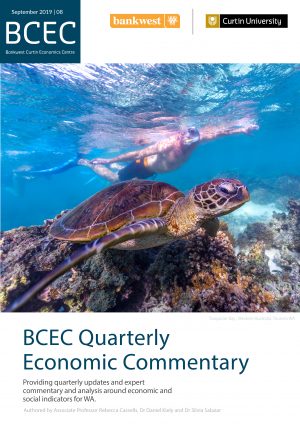 This Western Australia Quarterly Economic Commentary analyses the most recent data on economic and social indicators for WA, as at Q3 2019.

With annual Gross State Product data due for release in mid-November, a full picture of economic growth for WA over the 2018-19 financial year will be known. What is clear from the latest activity is that the WA economy will continue to rely on the mining sector and exports to prop it up over the coming quarters. No news here then.

But this reliance on the mining sector leaves WA more exposed than ever, with the economy becoming even more concentrated in recent years. And while international trade wars have not had a negative effect on WA thus far, the risk remains.

Diversification will be critical to long term economic prosperity for the state. BCEC research recently laid out a roadmap for industrial diversification and regional growth, which if followed, would create more than 163,000 new jobs across the state by 2025. Skills development and building a world leading STEM workforce are critical, with recent state government policy initiatives such as the reduction in TAFE fees welcome.

In the shorter term, uncertainty in the WA labour market and the economy more broadly remains. However, there are some good signs in this latest BCEC quarterly update that the WA economy could be turning an actual corner.

As public sector spending remains critical, is there a new ‘S Club’ in town?

Some readers may recall an English pop group called ‘S Club 7’ from the late 1990s. There was some debate as to what the ‘S’ stood for. I don’t believe ‘stimulus’ was one of the options put forward. Whether state treasurers are part of a new ‘S Club’, and whether S stands for stimulus or spending can be debated. But what is clear is that government expenditure, together with reform packages are becoming all the more important as we move into a new economic phase across the nation.

The impact of the RBA rate cuts and Federal government tax reforms have not yet made their way fully through the system. Early signs are that these factors are having a limited positive impact. Wage growth remains low, and with it, household consumption growth remains positive, but weak. In a similar vein, private business investment continues to decline.

On numerous occasions this year, this series has emphasised the important role government spending has played in the WA economy. Over the last twelve months, average quarterly growth rates in government consumption expenditure and public gross fixed capital formation remain above ten year averages. But governments will have to do more of the heavy lifting as WA, like much of the nation, waits-a-while for business and consumer confidence to return.

Mixed messages for the housing sector, with a glimmer of hope on the population front

The full effect of RBA interest rate cuts remains to be seen, and with recent stamp duty announcements from Premier Mark McGowan aimed at driving investment into the residential construction industry, this sector will be one that many will be watching, in hope, over the months and year ahead.

There are some signs that the mix of RBA cuts, Keystart initiatives, and first time buyer supplements are having a small positive effect. However, while housing finance commitments have increased on a monthly basis since May 2019, year-on-year data shows a decline of 6.8 per cent to August 2019 in WA, with average annual declines of -8.7 per cent over the last five years.

While dwelling commencements in WA saw growth of 3.5 per cent to June 2019, the number of dwelling units approved continue to decline. The Residential Property Price Index (RPPI) has decreased for all major cities across the last two quarters, with a decline of 1.4 per cent for Perth forcing the RPPI to December 2011 levels.

Meanwhile, population growth, displays some positive signs, particularly with improvements in net overseas migration. The Federal government’s reclassification of Perth as a regional destination for visa purposes, is likely to enhance the state’s capability of attracting a skilled migrant workforce, bringing with them, new knowledge, skills and innovative ideas. The housing sector will also be looking towards population growth to provide additional stimulus.