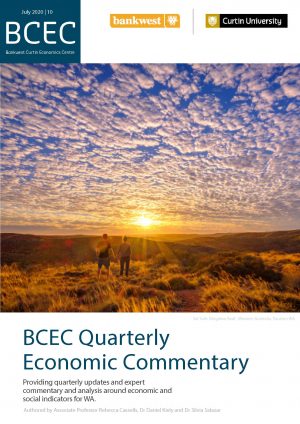 This Western Australia Quarterly Economic Commentary analyses the most recent data on economic and social indicators for WA. Key findings from this edition include:

Across the nation, the COVID-19 health crisis has applied a stress test like no other. The closure of national, state and regional borders, along with forced business closures and social distancing measures, has led to uncertainty, panic and pain for many business owners, workers and their families. The full extent of the economic fallout is yet to be seen, and the length of time before the economy returns to a new norm remains unknown, with the health crisis continuing across the globe and in Australia.

Federal, state and local governments have all put their shoulder to the wheel, as have banking and financial institutions and landlords. Businesses across the nation have shown resilience, but cashflow issues will become more challenging, especially when current levels of government support are scaled back. Unemployment levels are already significant, and would be much higher without the JobKeeper payments, which makes the next move by government to support businesses and workers critical.

WA’s domestic economy grew by 0.9% in the March quarter. While this is to be welcomed, growth was driven by public investments and, again, a heavy reliance on the mining sector – an industry which accounts for 40% of the WA economy. The factor of most concern in the March data release was the decline in household consumption, falling by 1.0% across the state. Household consumption contributes approximately 55% to the domestic economy and is a key marker of economic confidence. Given that the national and state economy had experienced less than one month of lockdown measures in the quarter to March, the recent decline in household consumption growth does not bode well for the June quarter and beyond.

BCEC’s COVID-19 insights and recent Monthly Labour Market Updates show the impact COVID-19 has had on the economy and labour markets in recent months. The loss of thousands of jobs and prospects of further job losses without significant government support and stimulus will likely increase, with September badged as the ‘Cliff’ from which many will fall. Together with new virus outbreaks Victoria and Stage 3 restrictions reimposed, times ahead will be challenging and consumer and business confidence is likely to waiver considerably.

While COVID-19 did bring new opportunities and increased demand for some businesses such as the retail food sector; businesses across the transport and tourism, accommodation and food services and retail sectors have particularly felt the pain, and will continue to do so for some time. In WA, these sectors combined have already lost more than 60,000 workers.

Construction, already on the back of significant declines to June 2019, has seen the modest growth to December 2019 wiped out in the March quarter, with the pipeline for future work declining on a quarter-on-quarter basis. Border closures and the related impact on population growth will add to the challenges for this sector. Government incentives for the Construction sector will add temporary support, but longer-term, population growth through migration will be crucial to supporting sustained growth in this sector and in the WA economy more broadly.

The geopolitical tensions bring additional uncertainties and this is a space that requires, from an economic perspective, careful management. The Australia-China trade partnership is mutually beneficial, with WA particularly reliant on mining and resource exports to China. Of course, through such exports, WA too meets the supply needs for a Chinese economy that has seen significant growth, and has experienced disrupted trade with other economies.

While iron ore prices and the strength of the mining sector more generally will be critical for holding up the WA and national economies, the negative impact of the pandemic on the domestic economy and on critical non-mining export sectors such as international education and tourism, will mean that there is much to hold up.

And let’s not forget a basic labour economic concept – labour is a derived demand. That is, demand for labour is based on the demand for and therefore production of goods and services. How the economic cliff is bridged will be of critical importance. Governments need to approach support measures for businesses, employees and communities in a careful and measured way – ensuring that public coin is used in a manner that builds a new economy, stronger society, and transitions the economy for long term sustainable economic growth.