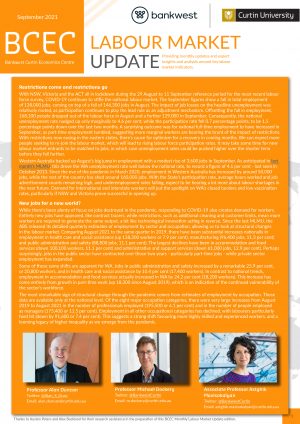 With NSW, Victoria and the ACT all in lockdown during the 29 August to 11 September reference period for the most recent labour force survey, COVID-19 continues to stifle the national labour market. The September figures show a fall in total employment of 138,000 jobs, coming on top of a fall of 146,300 jobs in August. The impact of job losses on the headline unemployment was relatively muted, as participation continues to play the lead role as an adjustment mechanism.

Offsetting the fall in employment, 168,100 people dropped out of the labour force in August and a further 129,000 in September. Consequently, the national unemployment rate nudged up only marginally to 4.6 per cent, while the participation rate fell 0.7 percentage points, to be 1.5 percentage points down over the last two months.

A surprising outcome was for national full-time employment to have increased in September, as part-time employment tumbled, suggesting more marginal workers are bearing the brunt of the impact of restrictions.

With restrictions now easing in the eastern states, there’s cause for optimism for a recovery in coming months. We can expect more people seeking to re-join the labour market, which will lead to rising labour force participation rates. It may take some time for new labour market entrants to be matched to jobs, in which case unemployment rates could be pushed higher over the shorter term before they fall further.

Western Australia backed up August’s big jump in employment with a modest rise of 3,600 jobs in September. As anticipated in last month’s MLMU, this drove the WA unemployment rate well below the national rate, to record a figure of 4.1 per cent – last seen in October 2013.

Since the eve of the pandemic in March 2020, employment in Western Australia has increased by around 50,000 jobs, while the rest of the country has shed around 160,000 jobs.

With the State’s participation rate, average hours worked and job advertisement counts remaining high, and underemployment rates falling, expect to be hearing a lot more about labour shortages in the near future. Demand for international and interstate workers will put the spotlight on WA’s closed borders and low vaccination rates, particularly if NSW and Victoria prove successful in opening up.

New jobs for a new world?

While there’s been plenty of focus on jobs destroyed in the pandemic, responding to COVID-19 also creates demand for workers. Entirely new jobs have appeared, like contract tracers, while restrictions, such as additional cleaning and customer limits, mean more workers are required to generate the same output, a bit like technological innovation acting in reverse.

Since the last MLMU, the ABS released its detailed quarterly estimates of employment by sector and occupation, allowing us to look at structural changes in the labour market.

The largest declines have been in accommodation and food services (down 100,100 workers, 11.1 per cent) and administrative and support services (down 61,000 jobs, 12.9 per cent). Perhaps surprisingly, jobs in the public sector have contracted over those two years – particularly part-time jobs – while private sector employment has expanded.

Some of these same shifts are apparent for WA. Jobs in public administration and safety increased by a remarkable 25.9 per cent, or 20,800 workers, and in health care and social assistance by 10.4 per cent (17,400 workers). In contrast to national trends, employment in accommodation and food services actually increased in WA by 24.2 per cent (18,200 workers).

This increase has come entirely from growth in part-time work (up 18,300 since August 2019), which is an indication of the continued vulnerability of the sector’s workforce.

The most remarkable sign of structural change through the pandemic comes from estimates of employment by occupation. Those data are available only at the national level.

Employment in all other occupational categories has declined, with labourers particularly hard hit (down by 91,600 or 7.4 per cent). This suggests a strong shift favouring more highly skilled and experienced workers, and a looming legacy of higher inequality as we emerge from the pandemic.