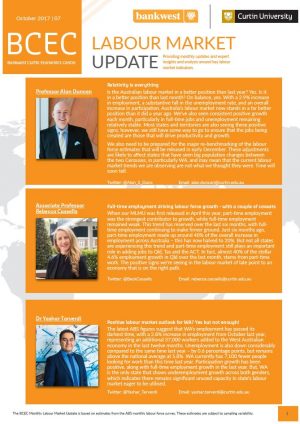 Welcome to the seventh edition of the BCEC Monthly Labour Market Update.

Key findings from October 2017 data include:

Positive labour market outlook for WA? Yes but not enough!

The latest ABS figures suggest that WA’s employment has passed its darkest time, with a 2.8% increase in employment from October last year, representing an additional 37,000 workers added to the West Australian economy in the last twelve months. Unemployment is also down considerably compared to the same time last year – by 0.6 percentage points, but remains above the national average at 5.8%.