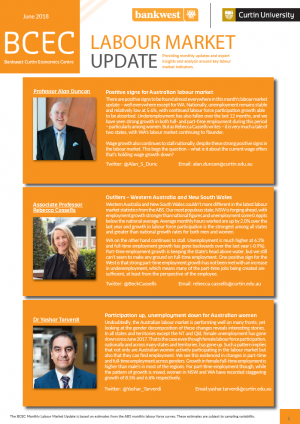 Welcome to the June 2018 edition of the BCEC Monthly Labour Market Update.

Key findings from June 2018 data include:

There are positive signs to be found almost everywhere in this month’s labour market update – well everywhere except for WA. Nationally, unemployment remains stable and relatively low at 5.6%, with continued labour force participation growth able to be absorbed. Underemployment has also fallen over the last 12 months, and we have seen strong growth in both full- and part-time employment during this period – particularly among women. But as Rebecca Cassells writes – it is very much a tale of two states, with WA’s labour market continuing to flounder.

Western Australia and New South Wales couldn’t more different in the latest labour market statistics from the ABS. Our most populous state, NSW is forging ahead, with employment growth stronger than national figures and unemployment some 0.6ppts below the national average. WA on the other hand continues to stall. Unemployment is much higher at 6.2% and full-time employment growth has gone backwards over the last year (-0.9%). One positive sign for the West is that strong part-time employment growth has not been met with an increase in underemployment, which means many of the part-time jobs being created are sufficient, at least from the perspective of the employee.

Participation up, unemployment down for Australian women

Undoubtedly, the Australian labour market is performing well on many fronts; yet looking at the gender decomposition of these changes reveals interesting stories. In all states and territories except the NT and Qld, female unemployment has gone down since June 2017. That is the case even though female labour force participation, nationally and across many states and territories, has gone up. Such a pattern implies that not only are Australian women actively participating in the labour market but also that they can find employment.