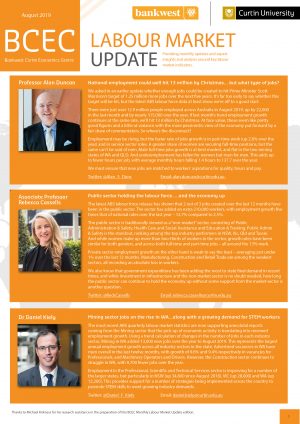 Welcome to the August 2019 edition of the BCEC Monthly Labour Market Update.

This latest release is supplemented by Industry and Public/Private sector insights that are released on a quarterly basis along with the Internet Vacancy Index.

We hope you enjoy our latest economic insights and welcome any questions, suggestions or feedback via email.

Key findings from August 2019 data include:

National employment could well hit 13 million by Christmas… but what type of jobs?

We asked in an earlier update whether enough jobs could be created to hit Prime Minister Scott Morrison’s target of 1.25 million more jobs over the next five years. It’s far too early to say whether this target will be hit, but the latest ABS labour force data at least show we’re off to a good start.

There were just over 12.9 million people employed across Australia in August 2019, up by 22,000 in the last month and by nearly 315,000 over the year. If last month’s trend employment growth continues at the same rate, we’ll hit 13 million by Christmas. At face value, these seem like pretty good figures and a little at variance with the more pessimistic view of the economy put forward by a fair share of commentators. So where’s the disconnect?

Employment may be rising, but the faster rate of jobs growth is in part-time work (up 2.8% over the year) and in service sector roles. A greater share of women are securing full-time positions, but the same can’t be said of men. Male full-time jobs growth is at best modest, and flat in the two mining states of WA and QLD. And underemployment has fallen for women but risen for men. This adds up to fewer hours per job, with average monthly hours falling 1.4 hours to 137.7 over the year.

We must ensure that new jobs are matched to workers’ aspirations for quality, hours and pay.

Public sector holding the labour force…..and the economy up

The latest ABS labour force release has shown that 2 out of 3 jobs created over the last 12 months have been in the public sector. The sector has added an extra 210,000 workers, with employment growth five times that of national rates over the last year – 12.7% compared to 2.5%.

The public sector is traditionally viewed as a “non-market” sector, consisting of Public Administration & Safety, Health Care and Social Assistance and Education & Training. Public Admin & Safety is the standout, ranking among the top industry performers in NSW, Vic, Qld and Tassie. And while women make up more than two-thirds of workers in the sector, growth rates have been similar for both genders, and across both full-time and part-time jobs – all around the 13% mark.

Private sector employment growth on the other hand is weak to say the least – averaging just under 1% over the last 12 months. Manufacturing, Construction and Retail Trade are among the weakest sectors, all recording an absolute loss in workers.

We also know that government expenditure has been adding the most to state final demand in recent times, and while investment in infrastructure and the non-market sector is no doubt needed, how long the public sector can continue to hold the economy up without some support from the market sector is another question.

The most recent ABS quarterly labour market statistics are now supporting anecdotal reports coming from the Mining sector that the pick-up of economic activity is translating into renewed employment growth. Using a trend calculation of changes in the number of jobs in each industry sector, Mining in WA added 13,000 new jobs over the year to August 2019. This represents the  largest annual employment growth across all industry sectors in the state.

Advertised vacancies in WA have risen overall in the last twelve months, with growth of 9.6% and 9.4% respectively in vacancies for Professionals, and Machinery Operators and Drivers. However, the Construction sector continues to struggle in WA, with 9,700 fewer jobs over the year.

Employment in the Professional, Scientific and Technical Services sector is improving for a number of the larger states, but particularly in NSW (up 34,800 since August 2018), VIC (up 28,000) and WA (up 12,200). This provides support for a number of strategies being implemented across the country to promote STEM skills to meet growing industry demands.