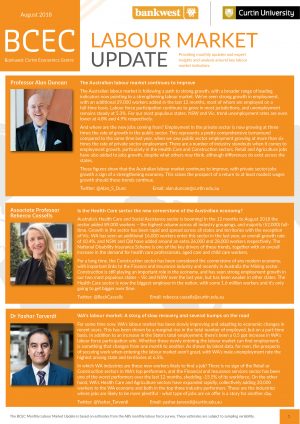 Welcome to the August 2018 edition of the BCEC Monthly Labour Market Update.

Key findings from August 2018 data include:

These figures show that the Australian labour market continues to improve, with private sector jobs growth a sign of a strengthening economy. This raises the prospect of a return to at least modest wages growth should these trends continue.

Is the Health Care sector the new cornerstone of the Australian economy?

Australia’s Health Care and Social Assistance sector is booming! In the 12 months to August 2018 the sector added 89,000 workers – the highest volume across all industry groupings, and majority (52,000) full-time. Growth in the sector has been rapid and spread across all states and territories with the exception of Vic. WA has seen an additional 16,000 workers enter this sector in the last year, an overall growth rate of 10.4%, and NSW and Qld have added around an extra 26,000 and 28,000 workers respectively. The National Disability Insurance Scheme is one of the key drivers of these trends, together with an overall increase in the demand for health care professionals, aged care and child care workers.

For a long time, the Construction sector has been considered the cornerstone of any modern economy, with important links to the Finance and Insurance industry and recently in Australia the Mining sector. Construction is still playing an important role in the economy, and has seen strong employment growth in our two most populous states – Vic and NSW over the last year, but has been weaker in other states. The
Health Care sector is now the biggest employer in the nation, with some 1.6 million workers and it’s only going to get bigger over time.

WA’s labour market: A story of slow recovery and several bumps on the road

For some time now, WA’s labour market has been slowly improving and adapting to economic changes in recent years. This has been shown by a marginal rise in the total number of employed, but on a part-time basis. In addition to an increase in the State’s total employment, there’s been a 0.5 ppt increase in WA’s labour force participation rate. As shown by latest data, for men, the prospects of securing work when entering the labour market aren’t great, with WA’s male unemployment rate the highest among state and territories at 6.5%.

In which WA industries are these new workers likely to find a job? WA’s Health Care and Agriculture sectors have expanded rapidly, collectively adding 20,000 workers to the WA economy. These are the industries where jobs are likely to be more plentiful – what type of jobs are on offer is a story for another day.