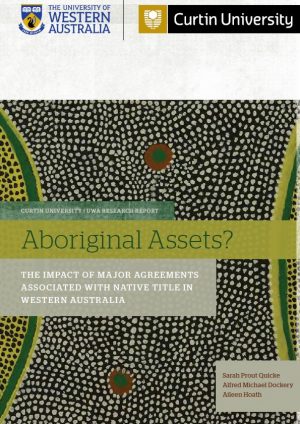 Agreements negotiated under the regime created by the Native Title Act (1993) are often seen as having the potential to address disadvantage faced by Aboriginal and Torres Strait Islander Australians and promote Aboriginal economic independence. This applies particularly to regional Western Australia, where remote communities are often co-located with major resource developments. Understanding how such opportunities can best be harnessed to benefit Aboriginal people State is critical. This report addresses the question of how effective agreements arising from native title determinations are at meeting the needs and aspirations of Aboriginal peoples who have achieved legal recognition as native title holders. It is based on a review of relevant academic and ‘grey’ literature as well as case studies of the experiences of three Western Australian Aboriginal native title groups in their efforts to leverage agreements with government and industry to enhance their wellbeing and pursue their aspirations. The case studies focused on two existing Indigenous Land Use Agreements; the relatively young Yindjibarndi/Rio Tinto Iron Ore agreement (Pilbara region) and the much older Ord Final Agreement (Kimberley region); plus the early experiences of the Gooniyandi Aboriginal Corporation (Kimberley region) in navigating the native title framework and agreement making processes.