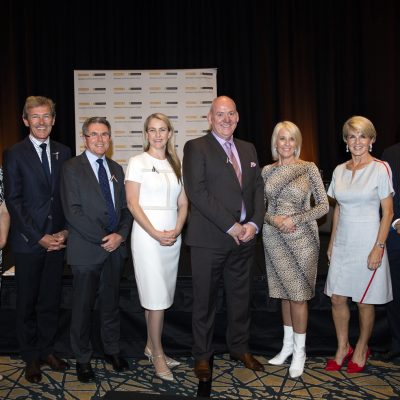 The Centre’s latest publication – Gender Equity Insights 2019: Breaking through the Glass Ceiling – was launched at a lunch event in collaboration with the Workplace Gender Equality Agency (WGEA) on Friday 1 March 2019, ahead of International Women’s Day.

This fourth report in the BCEC|WGEA Gender Equity Insights series, launched at the Hyatt Regency Perth, provides insight into positive change that has been made across different sectors in recent years, and highlights the importance of workplace policy initiatives in ensuring women continue to progress into senior positions and in narrowing the gender pay gap in Australia.

Betty Garlett, Noongar Elder, performed a Welcome to Country, and Professor John Cordery, Provost at Curtin University closed the event with a vote of thanks.

Speaking to the findings at the launch of the report, Associate Professor Rebecca Cassells, Principal Research Fellow at BCEC, noted that “women now make up almost half of the Australian labour market and hold around 40% of all full-time jobs, yet they are often under-represented in higher level and higher paid positions, and over-represented in lower paid jobs.”

“The good news is, progress is being made, and women now hold 36.3% of all full-time management positions within the workforce as reported to the Workplace Gender Equality Agency. And we have seen this increase over the last five years by around 3.2 percentage points, which is double the pace of growth in the full-time workforce overall.

“If the growth trajectory of women in leadership roles that we have seen over the last five years continues, it could take just two decades before we see equal representation of men and women in full-time management positions in the workforce. For lower tier managers, this could be even sooner, with parity just over 10 years away. But for the top spot of CEO, well, parity is not likely to be until next century if the current growth pattern continues,” Associate Professor Cassells said.

“The share of women in part-time management roles almost doubled when the company’s flexible work policies were held to account by their Boards, from 7.5 percentage points to 13.6 percentage points,” Professor Duncan said.

“Companies that offer at least 13 weeks of employer-funded paid parental leave halve the share of female managers who leave the company while on leave, compared to those who access only the government paid parental leave scheme,” Professor Duncan said.

Rowan Munchenberg, Managing Director of Bankwest said he is proud to be part of an organisation that takes gender equality in the workplace seriously.

“It is also a goal I personally value and pursue as a strong supporter and member of CEOs for Gender Equity of WA,” Mr Munchenberg said.

“I feel Bankwest in some ways reflects the wider corporate Australia in what we see in today’s report: we’ve shifted the dial and made some progress in certain areas – and it’s important that we call out and celebrate those wins – but then there are other areas that are sobering reminders of how far there is to go,” Mr Munchenberg said.

Hon Ms Julie Bishop MP, Member for Curtin, said the report is a substantial contribution to the Australian evidence of a global issue and the findings provide an impressive foundation for the discussion on gender equity and equality in Australia, and what steps we need to take to make progress.

“No nation will reach its potential unless it fully embraces and engages with the skills and talents and ideas and energy of the 50% of its population that is female. In Australia’s case, that’s almost 51%,” Ms Bishop said.

“If you don’t have a diversity of voices around the table – cabinet or boardroom – then you are missing out on 50% of the population.

“It is important that there a women who can advocate and pave the way for other women to come. Unless there’s a first woman to take on a role, there won’t be a second or third,” Ms Bishop said.

Libby Lyons, Director of the Workplace Gender Equality Agency said the report is a goldmine of information and the data critical.

“Examining the five years of WGEA data have provided real evidence of some of the things that we suspected were important in the journey towards gender equality. Now we know that we’ve got the hard evidence to drive change,” Ms Lyons said.

“There is a need to have flexibility in the workplace to make jobs more productive and satisfying for both men and women,” Ms Lyons said.

The report was covered extensively in the media, including coverage in Australian Financial Review, ABC, The West Australian, Business News and Sydney Morning Herald. The authors also produced an article for The Conversation, published on International Women’s Day.