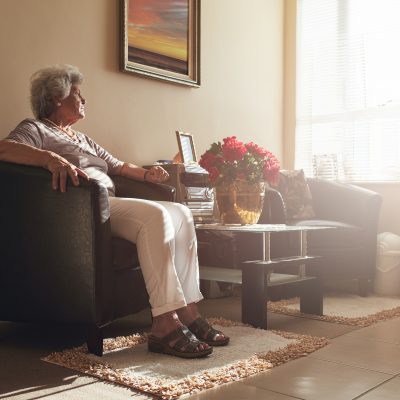 Many older Australians are living in larger dwellings than they need after their adult children leave the family home. The 2011-12 ABS Survey of Income and Housing shows households aged 55 and over are more than twice as likely to have three or more spare bedrooms in their home than those aged under 55.

However a report released by the Productivity Commission today found most people are happy staying in their family home, despite a common perception that such homes are too big for them.

For some older home owners, this may well represent a positive choice driven by lifestyle reasons or because of an attachment to the family home. But for others, the decision to remain in place may be forced by barriers that prevent them from downsizing into a smaller or cheaper property.

The Productivity Commission says there is a general lack of affordable downsizing options for older Australians, due in large part to the red tape and inconsistencies within state and territory land planning regimes. Older people who wish to downsize also face financial barriers inherent in the tax-transfer system.

There is an opportunity to promote more efficient use of housing stock by relaxing the disincentives to downsizing among seniors, and to reap something of a “double dividend” from so doing. This would free up housing space for younger families. And older home owners would be able to release some equity from their home by downsizing into a cheaper property. This would in turn help supplement incomes in retirement.

A recent report on population ageing by the Bankwest Curtin Economics Centre found downsizing activity to be quite limited among older Australian home owners. During 2001-13, the incidence of moves among home owners aged 45 and over was just 5%. Among those who did sell their family home only to buy a new one, less than half moved into cheaper dwellings.

There is general consensus that the tax-transfer treatment of downsizing proceeds blunts incentives for seniors to downsize. Firstly, net proceeds from downsizing are subject to means tests. Secondly, stamp duty has to be paid on new home purchases.

A comparison across the five most populous states in Australia show the impact stamp duty has on the decision to downsize.

From 2001 to 2013, downsizing accounted for 28% of all property moves in Western Australia by homeowners aged 45 and over. Equivalent downsizing rates were substantially higher in other states – 36% in Victoria and more than 40% in NSW. At the same time, the average incidence of stamp duty on housing equity released through downsizing was highest in WA at 25%. This compares to just 15% in Victoria and 12% in NSW.

However, a closer look reveals that jurisdictional differences in stamp duty parameters are not the cause of the relatively high stamp duty burden in WA. The fact is that older West Australians tend to downsize into homes of higher value than older home owners in other states. This finding is not surprising given the year-on-year spike in house prices that occurred in WA during the last decade’s resource boom. A growing lack of affordability in local housing markets is eating into expected returns from downsizing.

From piecemeal to meaningful tax reforms

Some recent attempts have been made to improve downsizing incentives, but the measures have been rather piecemeal. For instance, the 2013 downsizing pilot program proposed by the Federal government attracted criticism for its restrictive eligibility conditions. Stamp duty concessions for downsizing have been implemented in some states and territories. But they simply do not go far enough to overcome the combined financial and emotional costs of moving out of a home in which families have been raised, and memories built.

Economists have long argued for the total abolition of stamp duty. It is often recommended that this should be accompanied by the levying of a broad-based land tax. This two-pronged reform would not only cushion revenue incomes for the State but also promote affordability as land tax is capitalised into lower land prices. Such reform measures are of course feasible. But they are conditional on both tiers of government being willing to share the cost of transitional arrangements for existing home owners.

However, what is often overlooked are the structural problems inherent in the general tax-transfer treatment of housing assets. The exclusion of the primary home from welfare means tests has encouraged extensive accumulation of wealth in housing assets by home owners. Not only is the entire value of the family home exempt from assets testing, home owners enjoy a wider range and higher levels of housing subsidies than renters, including but not limited to the First Home Owner Grant, land tax exemption, capital gains tax exemption and non-taxation of imputed rent. Put bluntly, current tax-transfer settings simply do not offer any financial incentives for seniors to divest their housing wealth through downsizing or any other means.

The preferential tax-transfer treatment of home ownership has also helped fuel house prices to historically high levels, making it difficult for seniors to find affordable properties to downsize into in their local area. If tax reform is to be successful in encouraging downsizing among seniors, it will have to deal with an entrenched structural problem that has contributed to a long-run inflationary bias in housing markets.