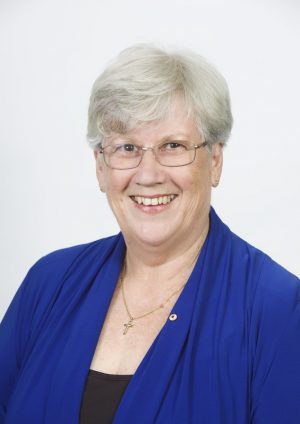 Sue Ash AO is a leader in the community sector in Western Australia. Sue was recognised for her distinguished service to the community, particularly in the area of social policy development, reform and implementation, and to the provision of services to people in need with the award of Officer of the Order of Australia in 2014.

She is currently working with the Department of Premier and the Cabinet as a Special Advisor during the COVID 19 pandemic. She is a Board member of the Lord Mayor’s Distress Relief Fund and recently completed a term as Board member of BaptistCare WA. Sue currently chairs the Board of the Early Years Initiative, a joint venture between the WA Government and Minderoo Foundation working with research partner Telethon Kids Institute.

Sue finished full time work in 2017 when she retired from the CEO position of Uniting Care West and completed her term as Deputy Chairperson of the State Emergency Management Committee, a position she held from 2012. Sue was a member of the Premier’s Partnership Forum from its inception in 2008 until her retirement.

In Sue’s previous role as Chief Executive Officer of the West Australian Council of Social Services (WACOSS), she was a leader in social policy development and advocacy on behalf of the community services sector. Previously, she was CEO of Care Options and Wanslea.

Sue has had a broad ranging career which has spanned service and development of communities, education and government, including emergency management recovery activities.  Sue has lectured in social work, social policy and human services management at Curtin University, Edith Cowan University and TAFE WA and NSW.

Sue has worked in the Commonwealth, Western Australian, New South Wales and Australian Capital Territory governments and participated in community service peak organisations including the Western Australian Association for Mental health (WAAMH), the WA State Committee of National Disability (NDS) and a range of advisory groups.